I never meant to leave that poor trucker stranded in the air. Here I was at the start of my hands-on experience with Watch Dogs, an hour-plus playthrough in which Ubisoft had given me carte blanche to do whatever I pleased within the game’s virtual rendition of Chicago. DualShock 4 in hand, I was still trying to get my bearings. Everything around me seemed ripe for hacking: cell phones, security cameras, traffic signals.

Then, while marveling at just how many objects in the world I could manipulate, I accidentally hacked a set of traffic bollards. Stout metal pylons jolted up from the ground, a neat trick for evading the police should you ever find yourself in a high-speed chase. Only I wasn’t in a high-speed chase. I was watching a perfectly innocent truck roll down a quiet one-way street when those bollards launched the front of the vehicle skyward, leaving its hapless driver suspended some ten feet off the ground.

He didn’t take it well. He screamed. He panicked. It was awful. I swore then and there that he would be the last citizen I terrorized that day.

He would not be the last citizen I terrorized that day.

I decided to use my powers for good rather than evil. But what powers would those be? I examined my skill tree. Sure enough, there were plenty of options for a vigilante hacker to work with: the power to cut off police radio networks (surely I would be thwarting only the corrupt cops), crafting improvised explosives (for dealing with criminal roadblocks!), and even the ability to trigger a citywide blackout (energy conservation is critical in this day and age). Only, there was a small problem. I didn’t have enough skill points.

Luckily for me, there was a story mission available that was sure to reward me for my efforts. Just a bit of light corporate espionage: sneak into a heavily guarded office building and plant a bug in the company director’s computer. I crept in through the loading doors, remotely triggering a car alarm to distract one security guard and then setting off a steam vent malfunction to lure away a few others. Eventually I made my way to the network access point needed to bug the director’s computer. Piece of cake.

Well, except for the six or seven times I died in a gruesome shootout trying to get there. Turns out, there are a lot of things you can use to distract highly-skilled guards, but the dead bodies of their associates are not on that list. Oh, sure, I could have continued using stealthy tactics and sneaking by unseen. But I had to test my abilities to see what sort of vigilante hero I was! The answer: the type that really needs to learn when and when not to employ a silenced handgun.

But no matter. I completed my mission and had my skill points. I unlocked the aforementioned talents plus one more: the ability to hack public transportation in order to make the L-trains start and stop on command. This one came in handy a lot sooner than I expected.

Maybe I got a little cocky and commandeered a firetruck. And maybe an entire crowd of people saw me do it. One of them must have called the cops because soon enough, I had a swarm of police cars after me. I wasn’t getting anywhere trying to evade them in a giant emergency vehicle, so I ditched the truck and dashed up some stairs and onto a train that had just pulled into the station. Rather than let it wait the extra few seconds to board more passengers, I hacked the thing and it was off. Then, I hacked the train once more so that it would stop before reaching the next station, where one could only presume the police would be waiting. I jumped out onto the tracks and made my escape. And by “escape” I mean fell off the tracks and onto a busy intersection. But what’s a broken leg to an urban vigilante?

Walking off my injury, I passed by a clothing shop and decided to pop in for a quick look. Inside were dozens of stylish looks tailored to the modern, trench coat-wearing gentleman of leisure. The vibrant colors all made my default leather coat look downright boring. But one caught my eye more than any other. It was a trench coat fully patterned in US Army digital camo. It was perfect! What better way to blend in amongst a throng of civilians than by wearing a knee-length jacket with a pattern designed for military combat? Also, it came with a new baseball cap and there is no vigilante on earth who can resist that kind of a bargain. 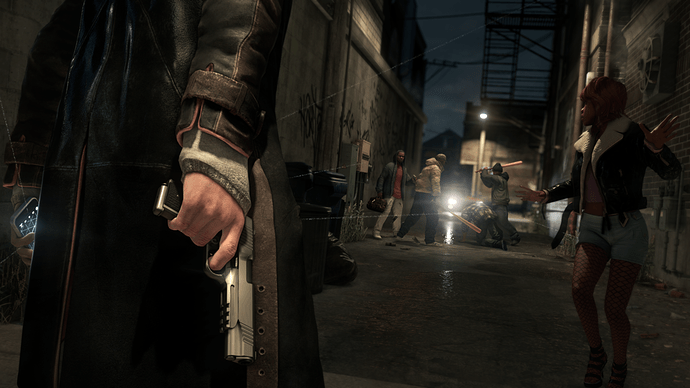 Not too far away from the coat shop I passed by a couple engaged in a heated argument. There was an uncomfortable tension in their voices, and it culminated in the man striking the woman in a fit of anger. Big mistake. I pulled out my handgun and shot him in the leg, a warning that his brutish behavior wouldn’t be tolerated as long as I’m around. But with the fire truck incident in the back of my mind, I fled the scene before any bystanders could pull out their phone and report me to the cops. Once it seemed like things had quieted down, I came back to see how he was handling his lesson.

He was handling it pretty well, all things considered. Except for one small detail: he bled out and died. But despite that small technicality, I like to think he really had something to think about for those few minutes he lay on the ground in incredible agony.

Okay, so maybe I got a little sloppy with that whole shooting thing. I needed to be smarter with my vigilante justice. Here I was with this fancy smartphone capable of tapping into the citywide surveillance network and I was just popping off shots in alleys and looking super awesome in my new coat. I would have to be more precise. More surgical.

So I began profiling, using my phone to gain instant access to personal information on every pedestrian I came across. Occupations, incomes, web browsing habits–you name it, I could see it at a glance. I could tap into people’s cell phone conversations, and even remotely read text messages. Would I help the school teacher suffering from tax problems? The man driven to dealing drugs in order to make ends meet? There were so many people I could help if only I found the right one.

I was really starting to get a hang of this urban vigilante thing. At one point I witnessed a car accident and took pity on the driver who had caused the collision. He was wracked with guilt over such a minor fender bender, practically sobbing over what he had done. So I yanked him out of his car and drove the thing straight into Lake Michigan. No evidence, no accident!

I found a man soliciting a prostitute in an alleyway and stared him down to let him know he was making a bad decision. Sure, it didn’t work, and things just got really creepy after a minute, but once they fled in terror after I threw a grenade at them I really do think they were ready to get their lives back on track.

But for all of my contributions to the greater good, it was hard to escape the feeling that there were bigger fish to fry. Stopping street thugs is one thing, but turning the tables on ctOS was something completely different. This was the Orwellian surveillance network peering into the lives of Chicago’s citizens. If I was going to make the city a better place, I had to focus on dealing with ctOS. 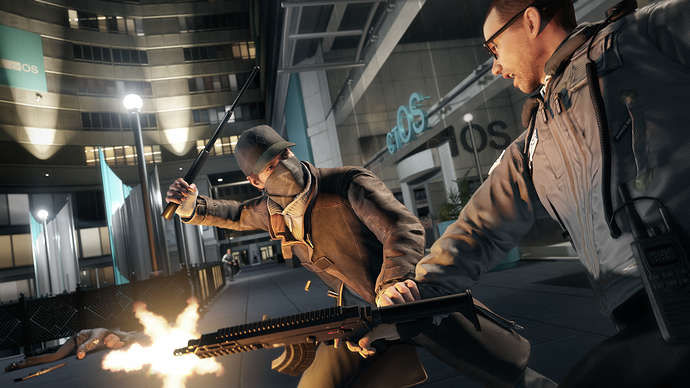 With my time playing Watch Dogs coming to a close, I set my sights on a lakefront ctOS facility. Hacking this place would give me access to even more of the city’s infrastructure, extending the potential for vigilante justice that much further. But these facilities are like miniature security compounds, with at least a half-dozen guards standing between me and the access point buried deep inside. I would need to plan a careful attack.

First there was the front door. Would I hack a hydraulic construction lift to gain access to a second story balcony, or distract the guard by throwing a sticky noisemaker onto a nearby van? Sticky lure it was. Would I plant proximity charges on the patrol routes of the guards within, or hack into the internal network and set off a series of electrical malfunctions? Charges would be fun, but I elected to go with stealth. Finally, I snuck up behind the one guard carrying the proper access code, used my phone to remotely download his data without him even noticing, and scurried off to the central computer to take out the facility.

I was feeling so cocky that I didn’t even bother to sneak back out; I ran for the door, practically taunting the guards who only just now realized what happened. This, in retrospect, was probably a mistake. Just as I hopped into a nearby car, they came flooding after me in wave after wave of security vehicles. These guys chased me across half of Chicago, from the downtown lakefront to the wards, dodging traffic just as nimbly as me. But even though they put up a good fight, in the end they were no match for my superior driving skills. And also my ability to trigger massive traffic pileups at intersections with the tap of a button. But I like to think it was mostly my driving skills.