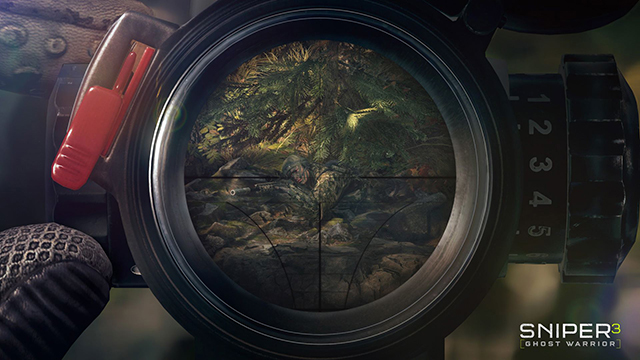 When C.I. Games’ military sim Sniper Ghost Warrior 3 comes out on the PlayStation 4, Xbox One and PC next year, the game will include a mechanic that some might mistakenly think was inspired by a similar gameplay device in the Batman: Arkham games.

Scout Mode highlights clues in the game’s open world. For instance, if an enemy soldier has walked by recently, Scout Mode shows his boot prints, which you can then follow. The mode also displays vehicle tire tracks or the paw prints of wolves that will eat you given the chance.

Using Scout Mode, players can also identify ledges to pull themselves up on, or hand holds in rock faces. It also locates side quests if, for example, you follow an enemy’s boot tracks to an explosives depot. It even shows you if the owner of said boots was dragging something behind him.

However, Scout Mode also works quite differently from Batman’s Detective Vision. Scout Mode only works while you’re holding down the button, and it disengages if you start running or shooting. It doesn’t change the graphics or sounds of Sniper Ghost Warrior 3 the way Detective Vision filters the audio and visual of the Arkham games. Instead, it blurs whatever you’re looking at, like you’re concentrating on those boot prints.

C.I. Games representatives said Scout Vision wasn’t inspired by The Dark Knight. Designers developed it organically so players can track things in the game. Scout Mode can’t be used to see through walls but can only point out things a highly trained sniper — such as former Marine Paul Robinson, the game’s creative director — would notice in real life.