Lords of the Fallen will be “a challenging game” - an RPG a bit like Dark Souls but for PC, PlayStation 4 and the next Xbox.

CI Games, the company behind Sniper: Ghost Warrior, is in charge, although it’s a separate team doing the honours - most of the work is being done by experienced German studio Deck 13.

Promisingly, Lords of the Fallen will have been in development for two years come September. “It’s a hardcore game, so we spent a lot of time prototyping it,” executive producer Tomasz Gop - once the face of The Witcher 1 & 2 - told me at Polish event Digital Dragons.

The aim is to get it out at some point next year.

“It’s a challenging game, action RPG, which means a lot of advanced combat,” he explained. "When you walk through a location, and you have to fight 10 enemies, that takes around an hour.

"When you fight in Mortal Kombat, when you fight in Tekken, that’s why it takes so long - Dark Souls is probably a strong reference as well. But we’ve done a lot of things differently. For example, we have a skill tree. I would call Borderlands here, because we’re gonna have something like action skills in the game, so classes, stuff like this.

“I would say Dark Souls, I would say Borderlands in terms of the experience of developing your character.”

"What do I think? Very brave, so to speak, decision from Microsoft. Still, the question is whether or not somebody had to do it sooner or later. I’m not personally worried about it myself because as a player it’s doable at my home. Even looking at countries like Poland … there are people who do not have internet, but probably most of them know that it wouldn’t even make sense in their case to own a current-gen console, because without the internet you have like half of the experience.

“I don’t expect it to be that big of a deal, personally. Still, I’m not an advisor on that - if it was up to me I probably wouldn’t do it so early.”

“Yes. Yes. Yes, yes,” Gop emphatically stated on that latter point. But harder than Dark Souls? He’s not sure, apparently it’s a game that needs to be played to be understood. “It’s one of these games that feels way better than it looks,” he said, “not that it’s going to look bad”.

Not at all; working on a multi-platform PC and next-gen console project has been “way better” than a PC and current-gen project, he said. “It’s way more comfortable.” And the new machines can achieve more. “The specs are pretty much known,” he said. “It’s gonna have a lot of things the previous generation didn’t have: all those eye-candy elements like DX11, tessellation, anti-aliasing,” and at no cost to gameplay.

He could talk about what 8GB of GDDR5 RAM in PS4 meant for Lords of the Fallen, though. “Way more richer detail on all of the assets,” he said. “For example, I couldn’t even imagine making a tessellated game on the current generation of consoles. It might even be one of the biggest gaps. And on the next ones consoles it’s going to be standard, in my opinion. And you just can see more on the screen right now, because it’s gonna fit and the memory’s gonna be fast.”

Counter-balancing that, however, is his first-hand experience that next-gen game development “means longer development times for really blown up games”.

“Yeah,” he continued, “because you not only have to produce more assets if you want to have a rich world - who doesn’t? - but also these assets take more time, more money, more iterations. The assets that we’re already doing for Lords of the Fallen are more expensive and take a bit longer to produce because they are better.”

A next-gen game is “probably doable” with a current-gen-sized team, he reckons, “but I believe if you want to take advantage of the hardware it’s going to take longer”.

Increased raw power aside, it’s the new features like video sharing that Gop thinks Sony and Microsoft will use to excite the public. “I really believe the breakthrough here is in the ability to record and share. If you’ve done something and you want to make a sort of guide out of it, you don’t have to go to a forum, you can just record it and show it,” he said, alluding to its potential for a “challenging” game like Lords of the Fallen.

“And this is just one tiny detail out of many of these new features,” he added. “This is probably the thing that defines this new generation of consoles more than the hardware itself.”

Gop couldn’t talk about the online features of Lords of the Fallen but said the team was looking at “some of the functionality that could be called online-ish”. “It’s definitely going to be primarily a single-player game,” though.

Right now, the Lords of the Fallen team numbers around 40. There are 30 at Deck 13 in Germany, 10 at CI Games in Poland, but the team will grow now full production is under way.

CI Games, a fast-growing international publisher and developer of interactive entertainment today officially announced Lords of the Fallen, a challenging fantasy action/role-playing game. Development of the game is being led by Tomasz Gop, former senior producer of the award-winning The Witcher 2: Assassin of Kings. Lords of the Fallen is a demanding and strategic third-person action-RPG experience being created for next generation consoles and PC, coming in 2014.

“Our team is building Lords of the Fallen specifically for players who enjoy taking on huge challenges, where the odds are stacked against them,” said Tomasz Gop, executive producer, CI Games. “From the very beginning, Lords of the Fallen will intrigue and satisfy players’ hunger to explore each corner of a brand new world, freely customize and build their own character and take down some of the most epic enemies ever seen.”

Lords of the Fallen is a hardcore action-RPG featuring an advanced combat systems and robust class skill trees. Set in a richly created fantasy world where the Gods have failed mankind, players will take on the role of a human named Harkyn who sets out on a quest to stand against an apparently unstoppable supernatural force. Players travel across a world that is deeply dived by those that follow and others that resist, the Fallen God. Along their journey they will be faced with a series of decisions that will alter both the world and their character thus dramatically impacting the storyline.

Playable version of Lords of the Fallen will be presented live at the Electronic Entertainment Expo in Los Angeles, California at the Los Angeles Convention Center from June 11-13, 2013.

CI Games, the company behind Sniper: Ghost Warrior, is in charge… :?

CI Games, the company behind Sniper: Ghost Warrior, is in charge… :? 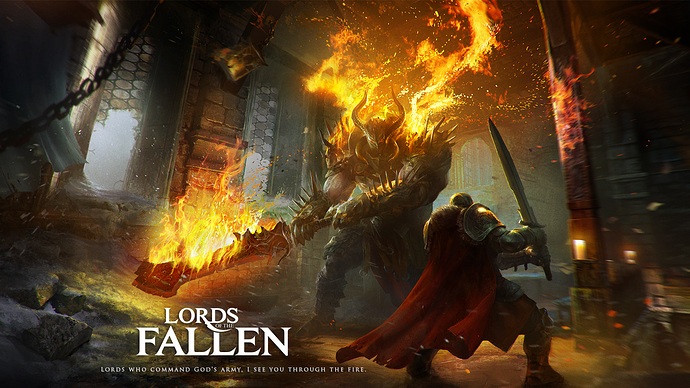 Learn more about Lords of the Fallen at Role Play Convention

CI Games, a fast growing developer and international publisher of interactive entertainment, will reveal more information about its upcoming Lords of the Fallen fantasy action/role-playing game during a panel discussion and Q&A session at the upcoming Role Play Convention in Cologne, Germany on June 1-2.

Tomasz Gop, the Executive Producer of Lords of the Fallen is looking forward to having more details about the game shared at the conference as members of the development team shed some light on some of the game’s features. One of the key features that they are excited to discuss is the gameplay balancing and difficulty levels in the game. “A challenge in games can be measured with the difference between randomness and skill. Our goal is to make a game that rewards players for doing what it takes to cross that gap. A game where learning skills and ultimately mastering them is the basis of fun and entertainment,” said Tomasz Gop, Executive Producer at CI Games.

Lords of the Fallen is a complex action-RPG featuring an advanced combat system together with an uncommon and interesting approach towards gameplay difficulty. Taking on a mission to defeat the Lords who command a Fallen Gods’ army, players will experience one of the most epic and unique fantasy universes in the action-RPG genre. Only proficient use of a huge arsenal of powerful weaponry and methodical planning of one’s actions will let players emerge victorious in the cruel world of Lords of the Fallen, where no mistakes are forgiven.

The Role Play Convention is the last occasion to learn more about Lords of the Fallen before a playable version of game will be official unveilled and presented live at the Electronic Entertainment Expo in Los Angeles, California at the Los Angeles Convention Center from June 11-13, 2013.

Lords of the Fallen will launch in 2014 on PC and next gen consoles.