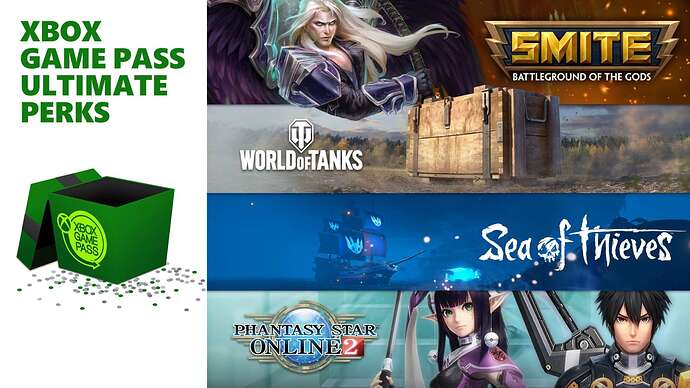 Today, we’re announcing Xbox Game Pass Ultimate Perks, a new exclusive member benefit starting March 18 that provides even more value for our Ultimate members. When we launched Xbox Game Pass in June 2017, we did so with the goal of creating a...

To kick things off, this month members can redeem these Perks for free:

Phantasy Star Online 2 : Enter the world of one of Japan’s biggest online RPGs with a special content bundle, which includes unique emotes, in-game cosmetics including an Xbox jacket, a gold ticket Mission Pass and in-game currency with a Meseta Crystal. Available to members in the US and Canada only.

World of Tanks: Mercenaries : A global multiplayer free-to-play game dedicated to tank warfare in the mid-20th century. Start your journey with three powerful tanks and more!

Sea of Thieves : The essential pirate experience, from sailing and fighting to exploring and looting – everything you need to live the pirate life and become a legend in your own right. With Perks, you get a free Ori-inspired Ancestral Sails, Figurehead, Hull, and Flag to adorn your ship.

Smite : Become divine in the #1 MOBA on Xbox, with a bundle that unlocks five Gods, special character skins and voice packs so you can ride into the battle of the Gods in style. With Smite, join a community of 30 million players and defend your portal in showdowns in the Collesium. 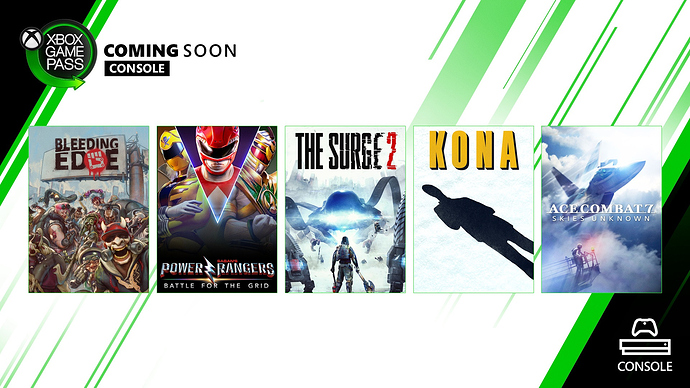 Ace Combat 7: Skies Unknown
Aerial combat has never looked or felt better than this. Soar through photorealistic skies with full 360-degree movement. Weather and environments affect your aircraft and HUD, making those dogfights just that more realistic. Take to the skies and become an ace pilot!

Kona
Northern Canada, 1970. A strange blizzard ravages Atamipek Lake. Step into the shoes of private detective to investigate surreal events in an eerie village while battling the elements to survive.

The Surge 2 – Xbox One X Enhanced
Your plane is shot down by a mysterious storm and crashes in the outskirts of Jericho City. Waking up weeks later in a derelict detention facility inside the city, you find that robots are on the rampage and a dark, expanding nanostorm looms over the city. The Surge 2 challenges you to unravel its hidden secrets in this hardcore, brutal melee combat game.

Bleeding Edge – Xbox One X Enhanced / Xbox Play Anywhere
Join the cybernetic clash of the century! Choose your fighter from a diverse cast of colorful characters from the edges of society: burn rubber as bold and beautiful Buttercup with her detachable saw blade arms, wreak havoc as Black-Metal rocker Niđhöggr with his electrifying guitar solos or slash up the streets as Daemon, New York’s most wanted assassin. Then grab your team and tear it up in Bleeding Edge , an electrifying online brawler where every fighter comes mechanically enhanced for mayhem.

Sony has now officially confirmed March 2020’s awesome PlayStation Now update, which includes Control and Shadow of the Tomb Raider. Both titles will be available to stream and download until 31st August