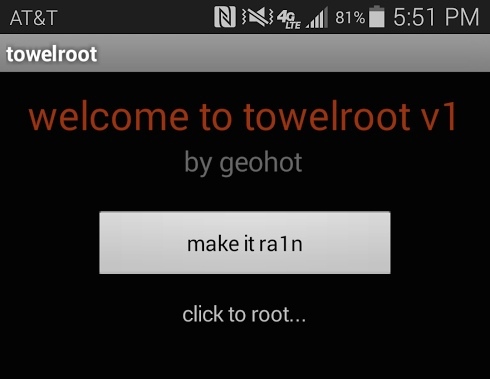 Geohot, a well known hacker behind several jailbreaks of the iPhone, today released ‘towelroot’ to root the Samsung Galaxy S5 and other Android devices.

Back in December, a leaked audio recording revealed that Geohot had been looking to sell his jailbreak of iOS 7 for $350,000. In March, Geohot won $150,000 for finding ChromeOS exploits.

To install, navigate to http://www.towelroot.com, click the lambda, install the apk, and run towelroot.

It’s unclear if Geohot is also working on a jailbreak of iOS 7.1.1 or iOS 8; however, there already have been several jailbreaks demonstrated. Those of you waiting for news on a release can follow iClarified on Twitter, Facebook, Google+, or RSS for updates.

I'm throwing a party and you should come **GS5 ROOT THREAD**

Don't worry, you don't have to leave your house When: 10 AM PDT tomorrow(6/15/14) Where: In this thread, in #towelroot on freenode, and at towelroot.com Software live at https://towelroot.com RIGHT NOW! Please report bugs to my gmail...

Sent from my iPhone using Tapatalk