Here’s the list of cars available in the April Alpinestars Car Pack:

Forty years ago the Mercedes 300 SEL 6.8 AMG achieved a class victory and second overall placing at the 24 Hours of Spa in Belgium. The 2011 Mercedes-Benz #35 Black Falcon SLS AMG GT3 has been given the exact same livery to honor that performance. This time it was driven by a team including Kenneth Heyer, son of Hans Heyer who accomplished that victory, with co-driver Clemens Schickentanz. In 2011 the team ended up taking a respectable third. The car went on to take second at the Bathurst 12 Hour Race as well. The car’s deep carbon-fiber splitter and huge rear-wing complement its distinctive long nose and extremely low roofline. Mercedes is back in the racing scene and its performance is as you would expect: among the best. 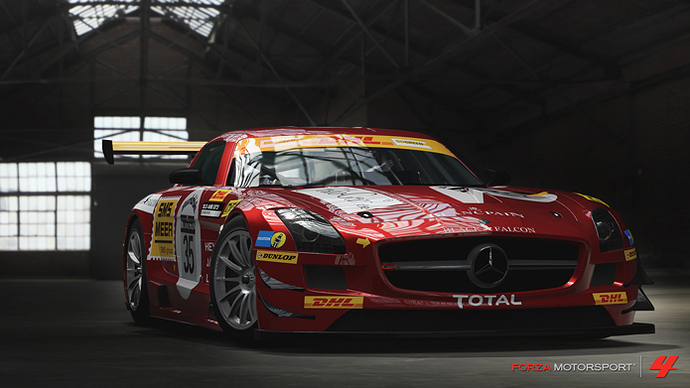 A ground-up developed monocoque and components that took extensive advantage of 3D printing technology are presented in the open-top AMR One. A small, agile, and very advanced design team has engineered every part of the car to take advantage of the FIA’s energy efficiency-focused regulations. The car employs an in-line, 2-liter, 6-cylinder turbo engine that produces upwards of 540 horsepower. It achieved a top speed of 187 mph at Le Mans in testing. Presumably, it is capable of even higher speeds. The AMR-One has front and rear triple-damper suspension and carbon-fiber brakes to control that power. As an experiment the car went where no others have gone before. 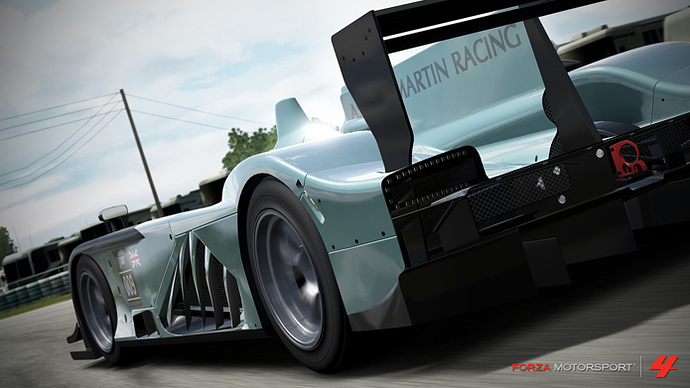 As Jaguar’s fastest and most powerful series production car to date, the XKR-S is no poseur. Its aggressive and sleek lines are straight out of the jungle yet not without grace. The super-charged 5.0-liter V8 brings over 540 horsepower to the table and 502 foot-pounds of torque to keep you slammed back in your seat. That’s enough juice to make the XKR-S Jaguar’s first full production car to become a member of the elite 186 mph (300kmh) and higher club. Keeping all this power grounded and sticky is an adaptive damping and stability control system with unique programming and revised rear-suspension geometry. Inside are plenty of leather and all the high quality accoutrements you would expect. The XKR-S strays from Jaguar’s typical design approach, but that’s part of its appeal. 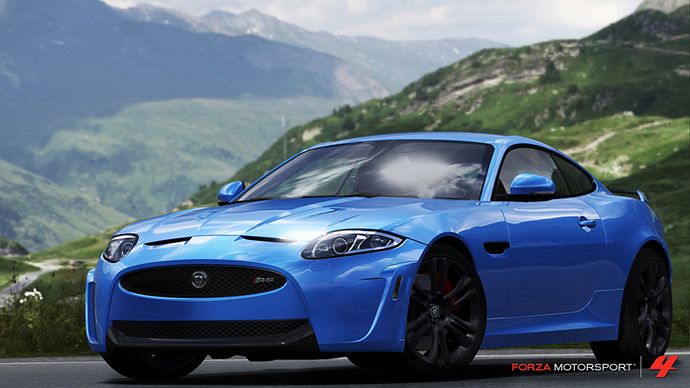 The 1995 BMW M5 represents the final year of the E34 series. This was the fastest production saloon car in its second evolution. It embodies both luxury and performance like no other car of its time. The M5 was hand- assembled and designed for the BMW owner that wanted to lead the pack in a 4-door luxury sedan. While never well suited to the track due to its excessive weight, the M5 is the ultimate touring car. The quick-revving, 3.8-liter, 24-valve, straight-6 engine delivered north of 300 horsepower and the 6-speed transmission was one of the few available in the mid-1990s. Together with its stiffer lower suspension, the car’s performance will rival many sport coupes in its class. These cars are highly sought after by BMW enthusiasts; find out why in Forza 4. 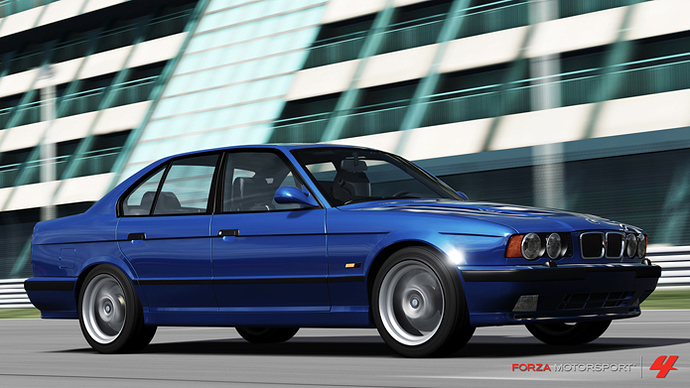 Maserati performance is only topped by its luxuriousness in the 2011 version of the venerable Quattroporte. The Quattroporte, meaning “four-doors,” is powered by a Ferrari-built, 4.7-liter, V8 delivering 440 horsepower and linked to a ZF 6-speed automatic; the GT S’s emphasis on sport driving acumen is evident. As one expects from the Italians, Maserati provides a gorgeous sounding motor. Its volume and tone can even be adjusted via a valve-controlled exhaust. In normal mode you can revel in the car’s power in near-silent luxury, but in sport mode the roar of the Ferrari-built engine will provide a concert of throaty rumblings. The quick shifting close-ratio gearbox delivers rapid power at any speed. Even though the GT S is obviously a touring saloon, its cornering aptitude will surprise you. 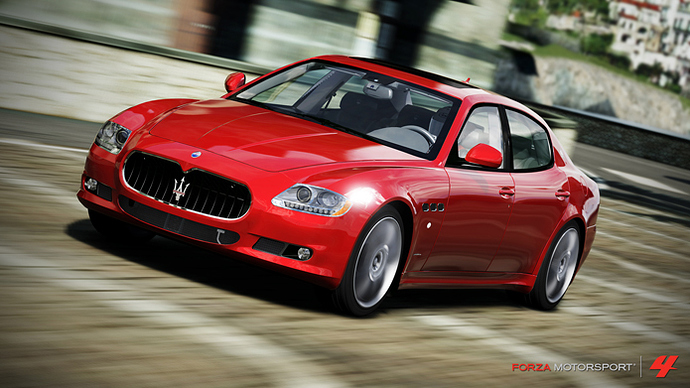 There are so many reasons to appreciate the Mazda RX-7; if not for its performance-per-dollar value, then for its innovative design. The Wankel-powered RX-7 is the only vehicle to utilize the awesome, unlimited revability of the rotary engine. The ’85 GSL-SE introduced the 13B engine, the largest, most powerful RX-7 rotary motors to be developed at the time. The car also received bigger brakes and stiffer springs and shocks. Since the motor was situated behind the front axle it was referred to as front-mid engine. The result was a perfect 50/50 weight distribution. Altogether, the car weighed barely 2,500 pounds and, with its live-axle rear end, turned a .77 on the skid pad. Combined, these factors produce a formidable sports car. They are a rip to drive and one of the most affordable sports cars around. Tune one up in Forza and watch it blow away more powerful cars. 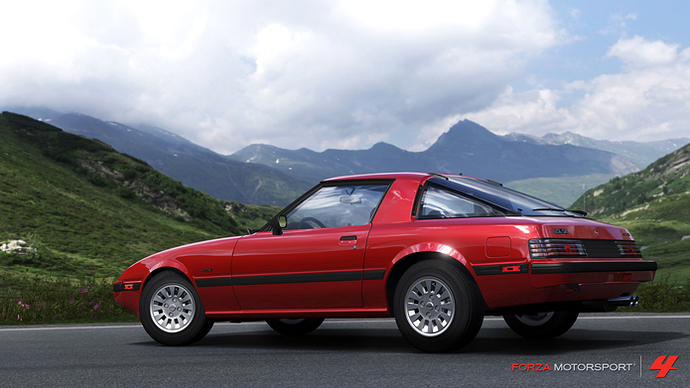 At a glance, the 1972 300 SEL shows itself to be a composed, beautifully appointed luxury saloon. Under the hood, however, is the big 6.3 liter V8 from the 600 limousine. It could push the car to a top speed of 137 mph. In utter comfort, mind you. It was, in fact, the fastest sedan in the world in 1972 and did 0-60 in 6.5 seconds. Its air-ride suspension was self-leveling based on the load. AMG was just a small local tuning company back then. They produced special competitive versions of the 300 SEL and had an impressive, albeit short, racing career. The most famous was the “Red Sow” or “Red Pig.” Sadly, the early seventies energy crisis meant the end of the 300 SEL 6.3. It will not be forgotten though, especially when you can wheel it anytime in Forza 4. 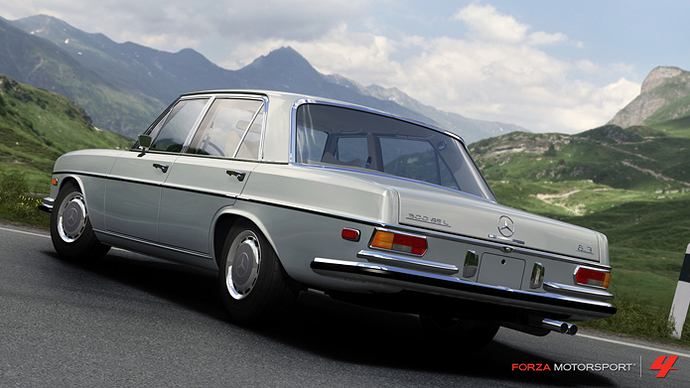 Named after the sophisticated French resort town patronized by the likes of Napoleon and Queen Victoria, the Biarritz convertible defined elegance and grace in the automotive world of the late 1950s. It also redefined the term “land yacht.” The car was almost 19 feet long and more than seven feet wide. The huge tail fins, the tallest ever made, and the unique “rocketship” taillights were just a few of the styling cues that set this car apart. Powered by a 345 horsepower triple-carbureted 390 V8, this 5,000- pound luxury cruiser could reach 130 mph. Turning radius was a mere parking lot width of 24 feet and the air-ride suspension while providing a comfy ride gave the Biarritz a distinctive float. Elvis, even had one custom built for him. Some things have changed since the 50s but back then one thing is for sure: in some cases, size does matter. 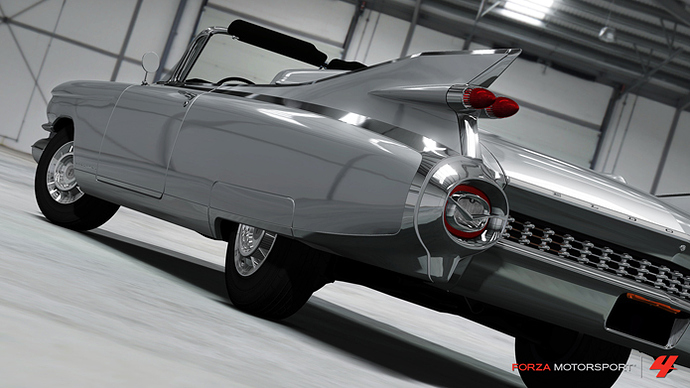 Functional, sporty, safe, and well-equipped, sum up the 2012 Scion tC. It’s an entry level car with a unique look that features sound performance for a fair price. Under the hood is a 2.5-liter four-cylinder connected to the front wheels via a 6-speed transmission. It will do 0-60 in just under eight seconds and gets very reasonable mileage. For 2012, the body received a much more chiseled look and as with all Scion’s the list of dealer options is very long. 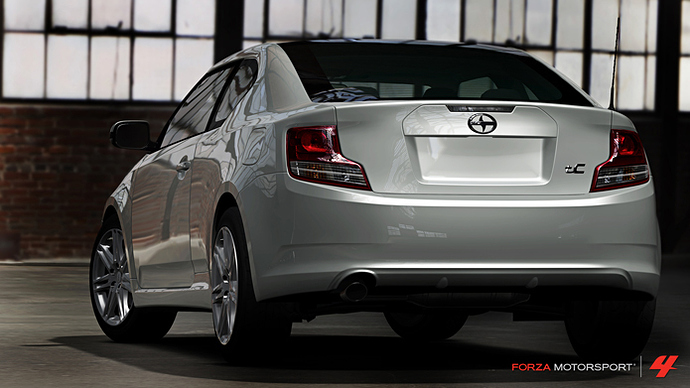 The terms “sport” and “wagon” rarely come together, but Volvo has been building some of the safest and most exciting sportwagons for years. With a turbo-powered 5-cylinder engine making 240 horsepower you might forget you’re in a wagon pretty quickly, until you remember you might be hauling the kids and family dog with you. 1997 was the first year the Volvo wagons came with front-wheel drive in the U.S… The 850 R will hit 155 mph flat out and fares pretty well in the corners. It’s no lightweight, though, so copious braking is recommended. In all, if you have to drive a wagon but still desire performance the 850 R has got you covered. 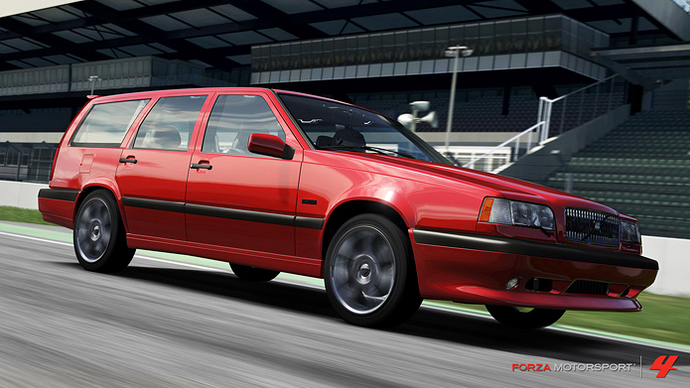 The April Alpinestars Car Pack will be available for 560 MS Points ($7 USD) and will be free to download for those who have already purchased the Forza Motorsport 4 Season Pass. The Season Pass is your ticket to six game add-on packs as they’re released. Players can purchase the Season Pass on the Xbox LIVE Marketplace and at participating retailers – including Best Buy and GameStop – for only 2,400 Microsoft points ($29.99 USD) The “Forza Motorsport 4” Season Pass is redeemable for six game add-on packs, representing a 30 percent overall savings as compared to purchasing the content separately. New purchasers will also receive all previously released game add-on content and the April Alpinestars Car Pack.