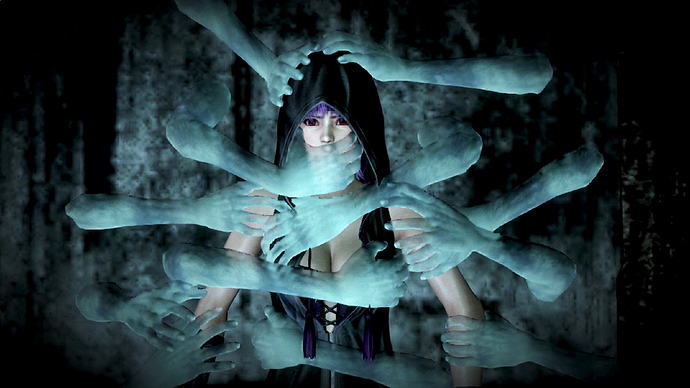 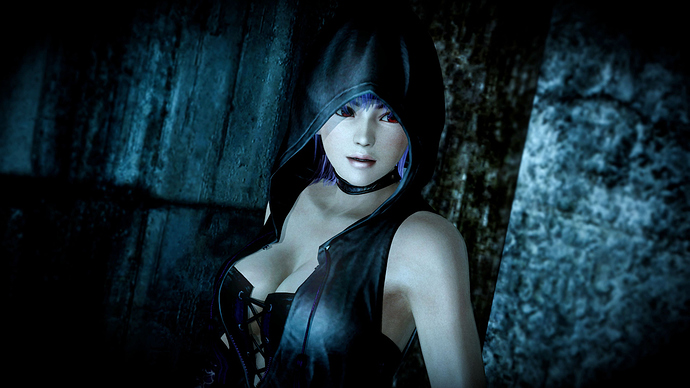 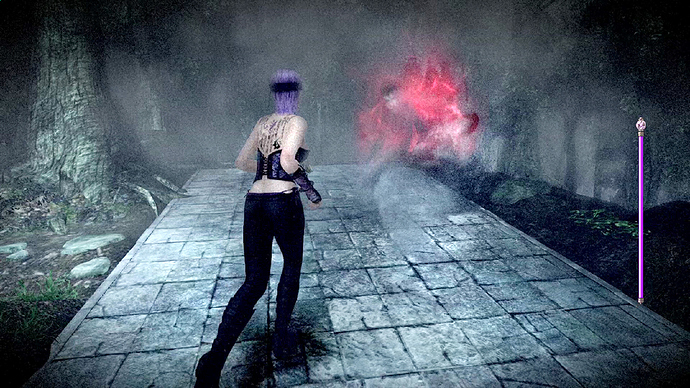 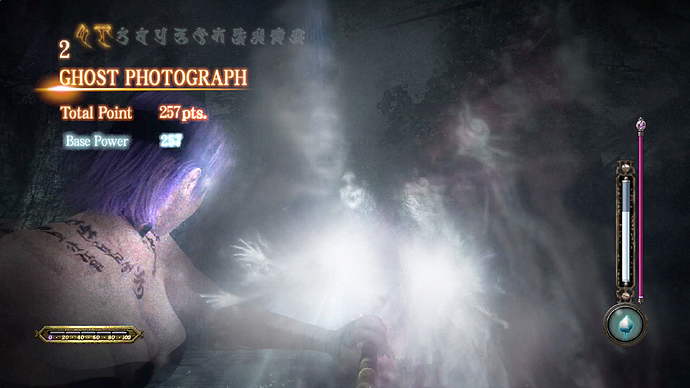 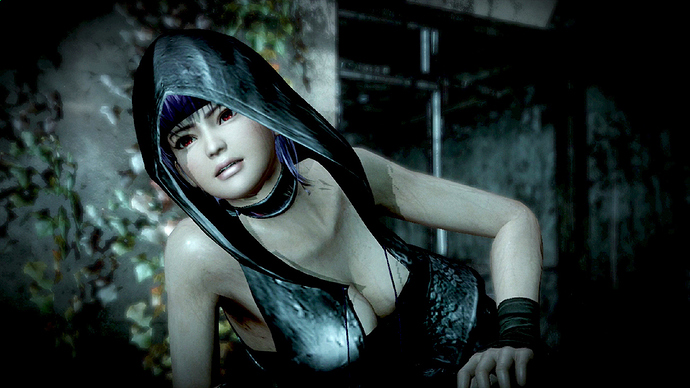 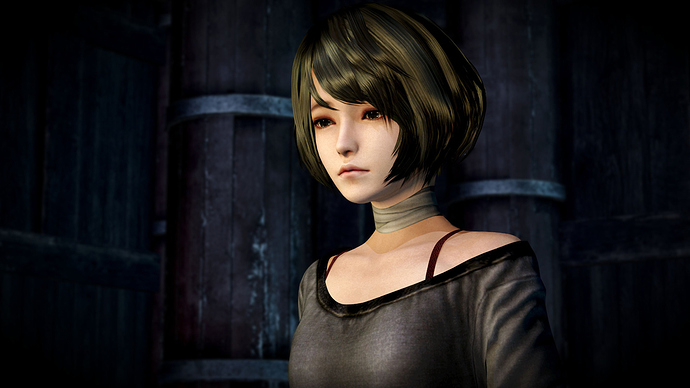 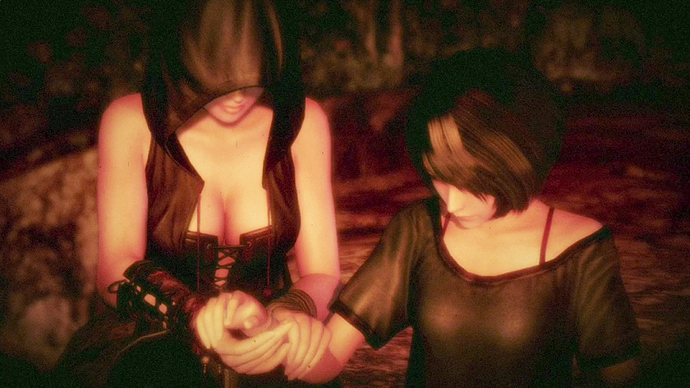 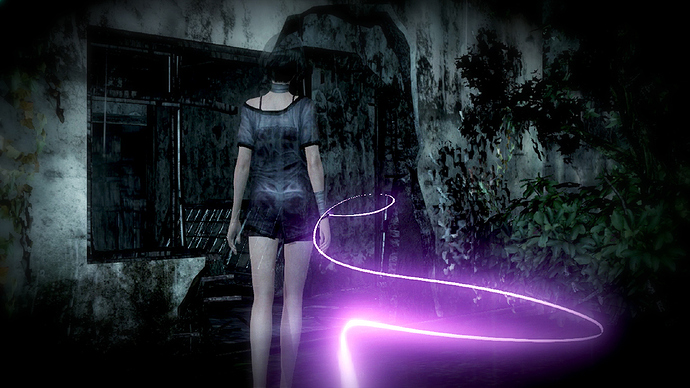 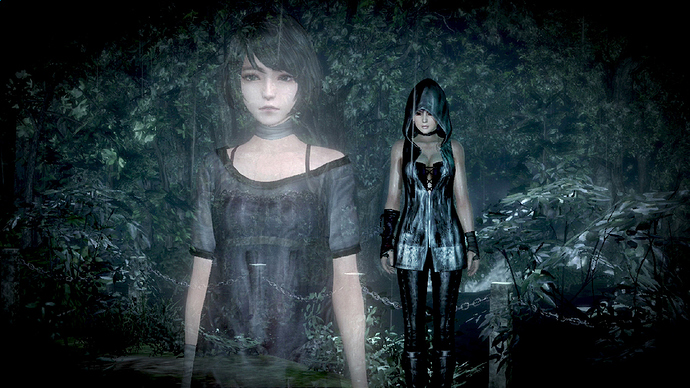 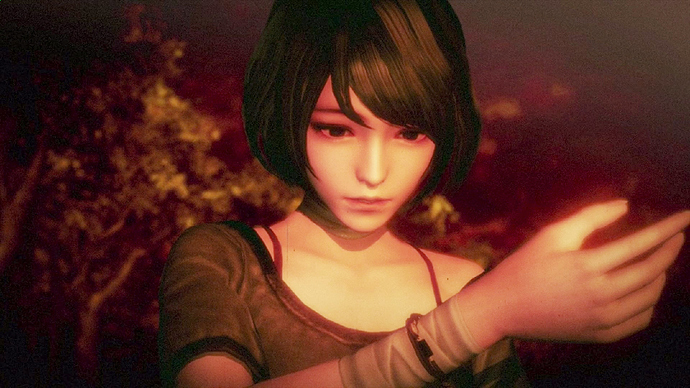 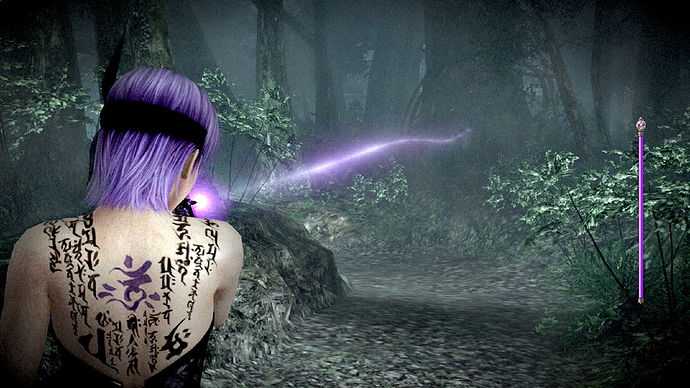 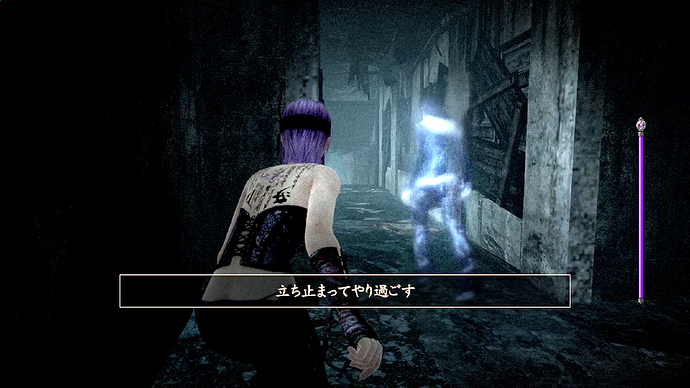 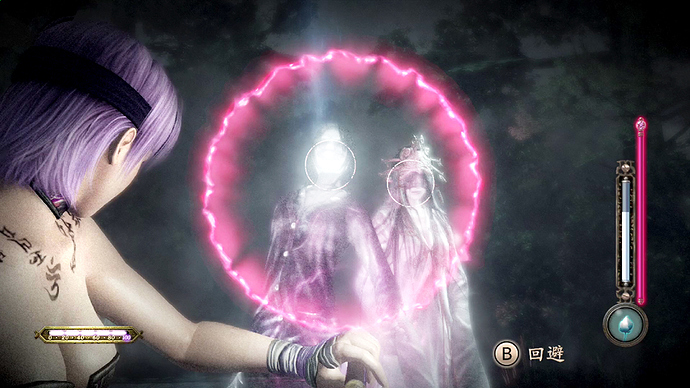 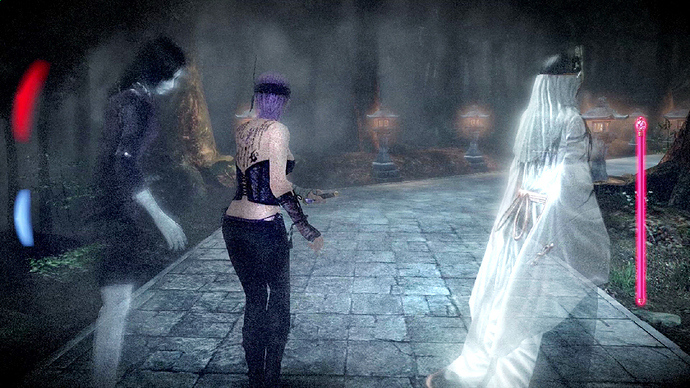 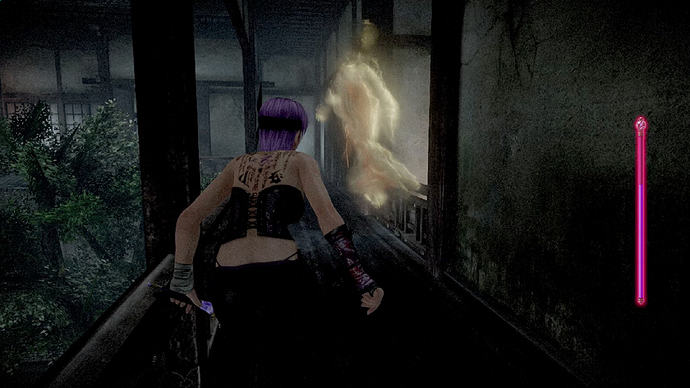 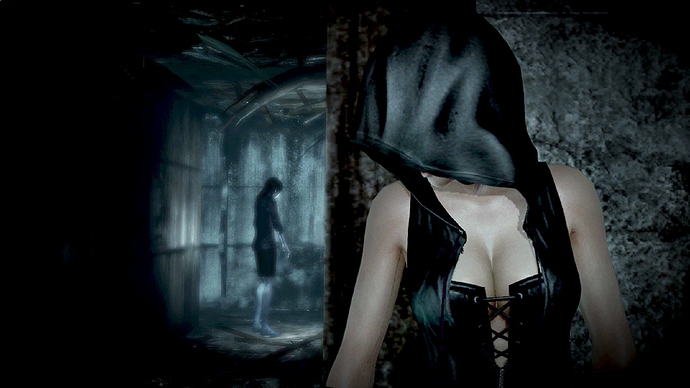 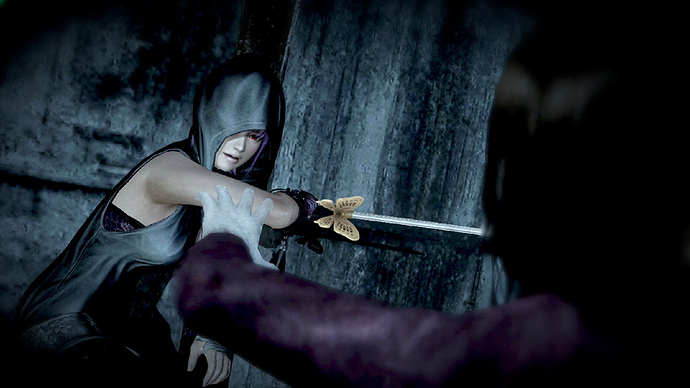 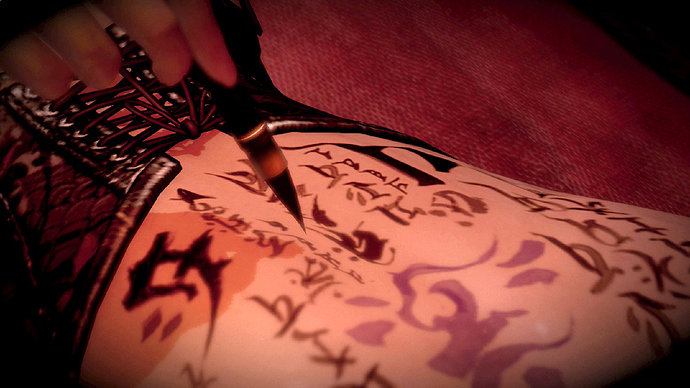 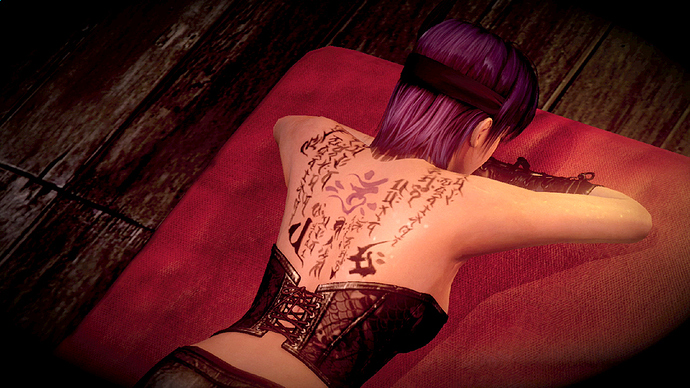 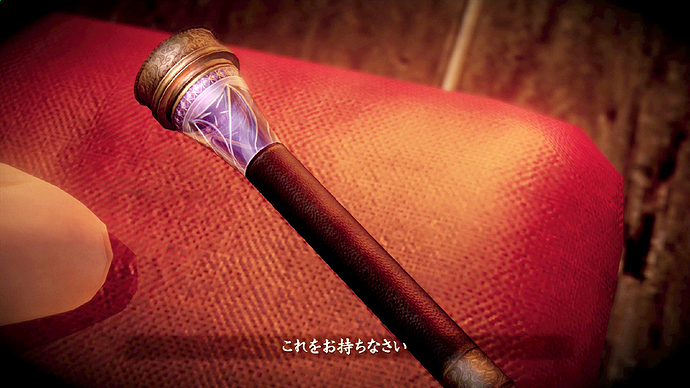 Unlike her older half-sister (paternally), who was raised with love and kindness, she was frozen out by her family and has a complex because of it. She is not good with people and hates herself, heading for Mt Hikami after failed suicide attempts, where she is spirited away.

Ayane visits the mountain, using her “purple thread” power to track down Tsumugi after being requested to do so. She sneaks into an abandoned building there and is gravely wounded, but manages to escape. She apparently appears after you beat the main game, so I assume Tsumugi too.

During the mission, Ayane can’t defeat ghosts like the 3 main protagonists. She must hide and sneak around to progress. If she runs or gets near a ghost they’ll see her, so you have to act accordingly. She has a “script of hiding” that she can apply to her back to make herself invisible to ghosts. If she’s caught by a ghost, she can use the light of the Spirit Stone Torch to knock back and temporarily stun them.

Shibata, Kikuchi, Ozawa, and a new planner - Ohtani - in attendance.

They start off by asking why they chose the Wii U. Kikuchi responds that the first time he saw the gamepad, he thought it was made for FF. To make it a good combination they decided on two things: a story and worldview that would extend expression, and turning the gamepad into the Camera Obscura for a good play experience. Now Ohtani says that when he joined the team, they initially tried to think of a different kind of FF game not using a camera, for example having a gun or sword, or a sci-fi setting such as in Metroid, but decided the camera was better in terms of making you face scares up front.

Ozawa says that, since it was a brand new game on a brand new console, they specifically sought members for the team who’d not worked on an FF game before, to expand their borders. They took all of those new ideas and put them together. Kikuchi says the ideas they came up with were: a horror with lots of kinds of fear; places where you could experience realistic ghost spots; lots of beautiful girls; and the charm of the expression of being wet. The most important thing at its core was the story. Shibata chose black as the key colour and they made a bunch of things, turning it into its current form.

Ozawa says that, in preparation, they watched a lot of scary videos online, and got together lots of data about being wet and the light. Kikuchi says they adjusted the graphics as they went along; that they may look pretty, but you lose something from it, since the FF games are known for creating fear via the imagining of things you can’t see. For this reason, despite being told that the graphics were pretty, they edited the mitori movies to make them quite hard to see, and it took a lot of work. Shibata says that at first they only obscured the images a little, but with newer games they’ve ended up becoming clearer. You can see them well, but there are new effects in there to give them atmosphere.

Ohtani says that they made it as dark as possible, but sometimes making it too dark impedes gameplay, so it was difficult to adjust. Ozawa likes how clear the lighting from the torch on an HD console is. Shibata adds that, ultimately, playability won out over darkness.

Ozawa says that they spent a lot of time on the game for those who found the others too difficult to play. Shibata says that a movie, manga or novel has developments too, so they were careful to make it so that new people could play it easily as well. One of the concepts they thought of to help out new players was reihen, because you can do damage even from far away, and the second was zanei, to guide the player. You have conversations at the start and end of a mission as well, making the story easier to understand.

Shibata says that one of the things they wanted to try out, now that the Wii U can do it realistically, is water. When you’re outside you can run quickly, but water creates resistance that slows you down, so you can’t escape from ghosts. He’d normally want people to be looking behind them in fear, but the tempo of play is more like that of an action game to make it more suitable for first-timers.

The interviewer brings up how the clothes go seethrough when they get wet. Shibata laughs, because it’s something he wanted to do. Kikuchi says their clothes were designed to make them look sexy when wet. Their normally floaty clothes, says Ozawa, get stuck to them, and Shibata says that there’s a wet scene in the very intro, so look out for it. They also spent a lot of time thinking about how water drips when they stand up, for example from the collarbone to the chest. Ozawa jokes that Shibata spent a lot of time thinking about collarbones for this game.

They say that many parts of the game system are aimed at new players. Each of the three characters proceeds along from their own unique point of view, converging in the ending. However, on the other hand, a lot of things in the story are aimed at existing fans of the series. As well as the main characters, there are several partner characters of various types who accompany them.

In terms of costumes, each character has a few types. There are accessories, too, so you can pair them up as you like. They had a lot of glasses - for example, student ones to go along with a student outfit, because Shibata thought it necessary.

Ayane comes from Team Ninja’s Hayashi, who requested she be in the game. Everyone came up with ideas and decided not to make it a standard bonus, but make a proper episode out of it. You get to enjoy sneaking around, with a different weapon. Since it’s DoA, they’ve naturally made sure to bring out her beauty and sexiness. They spent a lot of time adjusting things like the wobble of her chest. Team Ninja gave them lots of advice.

They finish up by reiterating that the game can be played by both old and new players, and that the story is large and easy to understand.