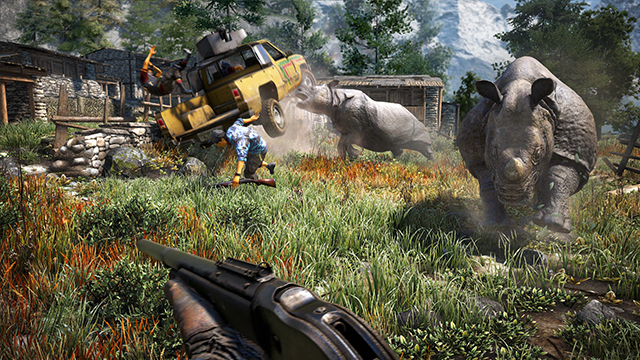 Alex Hutchinson @BangBangClick
Follow
PC players! If you’re online complaining about the lack of FOV control … You pirated the game.
4:08 AM - 18 Nov 2014

Whoops. Apparently, legitimate buyers of the game received the option to adjust the game’s field of view courtesy of a stealthy day-one patch. Those who pirated the game illegally did not. It’s not clear whether this was an intentional honeypot or a simple case of the feature not being ready before launch day, but either way it’s proved to be a fairly ingenious way to call out pirates. There’s nothing the PC Master Race love more than complaining about a port that’s lacking in options, and FOV is usually one of the most common offenders.

Of course, not everyone took being called out gracefully. Several users responded to Hutchinson’s statement with claims that they only pirated the game because they didn’t feel they could trust Ubisoft to put out a quality product without testing it first, especially in the wake of Assassin’s Creed: Unity‘s rough launch. The rationale has long been a common one, and it may indeed have some merit, but, as Hutchinson then pointed out with another dose of tough love, it doesn’t change the fact that piracy is still illegal.

Carnotán @carnotan
.@BangBangClick Maybe then you’ll have the moral authority to demand anything to the users. You really need a reality check.
Alex Hutchinson @BangBangClick
Follow
@carnotan We will always be able to demand that people pay to receive our games. That’s why it’s the law.
8:31 PM - 19 Nov 2014