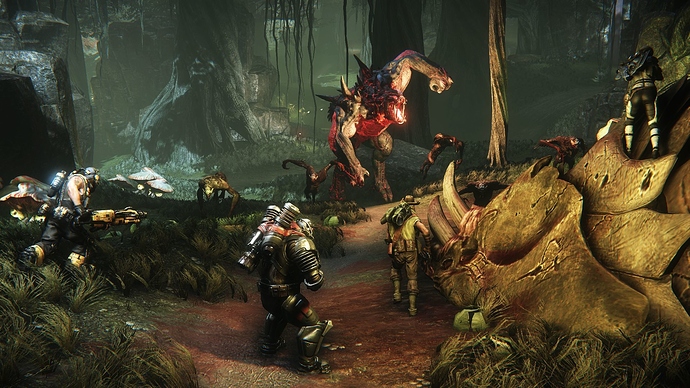 2K Games and Turtle Rock Studios have deployed the Big Alpha for their upcoming 4-v-1 multiplayer romp, Evolve. At least they have for most platforms, anyway. They didn’t foresee any of the issues that would suddenly pop up on PlayStation 4, which has now caused 2K to postpone the alpha on that platform indefinitely, due to issues with the recent 2.00 firmware update.
“We have some unfortunate news to share with folks planning to participate in the Big Alpha test on PlayStation 4 starting today,” reads a post on the Evolve website. “Following the recent PS4 2.00 firmware update, we are experiencing difficulties with the Evolve Big Alpha on PlayStation 4. As a result, the test on PlayStation 4 is postponed. PlayStation and 2K are working together on a resolution.”
2K is encouraging PS4 users to jump on Xbox One or PC to get in on this weekend’s fun. Otherwise, they will offer updates as they come.

2K and Turtle Rock have encountered issues with the PS4's new 2.00 firmware update, forcing them to postpone this weekend's Evolve 'Big Alpha' for that platform.

The Evolve Big Alpha is currently being enjoyed by Xbox One and PC gamers, but PlayStation 4 owners have been left out in the cold due to issues Turtle Rock Studios came across some issues with the recent release of the 2.00 firmware update. It looks like that has since been rectified as 2K has announced the Big Alpha is now available for PlayStation 4 owners.
Because of the hiccup, PlayStation 4 owners will be able to enjoy the Big Alpha up until 12PM PT on Tuesday, November 4. Best of all, Xbox One and PC players will have their alpha time extended to this new date and time as well, instead of having it end later on this evening.
Even though the PS4 version of Evolve is available, 2K notes some players may experience issues with the Big Alpha. “While internal testing shows the majority of PS4 matches are completed successfully, some players will encounter interruptions and issues affecting the Evolve experience.” So keep that in mind if you plan on partaking in the Big Alpha on the PS4 sometime over the next few days.