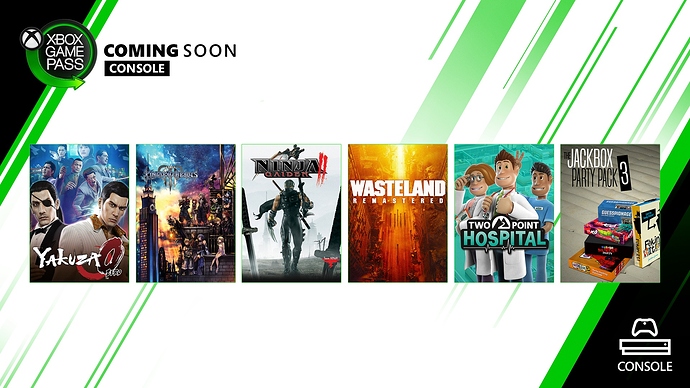 Ninja Gaiden II
This sequel to the best-selling original Xbox game pits legendary ninja Ryu Hayabusa against hordes of malicious enemies as he sets out on a journey that will determine the fate of humanity. With an assortment of new weapons, enemies, and locations, the classic Ninja Gaiden II redefined the action game genre, providing a visceral, thrilling experience.

Kingdom Hearts III – Xbox One X Enhanced
Having learned that Master Xehanort is plotting to start another Keyblade War, Sora and his friends continue their search for the seven guardians of light who can stand against the coming darkness. Join Sora as he travels across new and exciting Disney worlds that deliver a story on a grander scale than ever before. With a new battle system as well as thrilling action and spectacular team-up moves with beloved Disney characters, Kingdom Hearts III inspires and entertains unlike anything else out there.

Two Point Hospital – Xbox One X Enhanced
Design stunning hospitals, decorate them as you like, cure very unusual illnesses and manage troublesome staff as you spread your budding healthcare organization across Two Point County. But don’t expect it to be populated with your usual types of patients. In this world, you’ll experience Two Point’s trademark quirky illnesses; from light-headedness to cubism – each requiring their very own special type of treatment machine.

Wasteland Remastered – Xbox Play Anywhere
The original Wasteland brought the post-apocalypse to video games and inspired a genre. Play one of the definitive RPGs with overhauled graphics, sound, and expanded musical score. It’s 2087, nearly a century after an all-out nuclear war turned vast swaths of Earth into a radioactive hellscape. You’re a Desert Ranger, a band of stalwart lawmen who are the only hope left in what was once the American Southwest — and good people’s last defense against hunger, sickness, raiders, and mutants. Now something more secretive and sinister is menacing humanity, and it’s your job to investigate.

Yakuza 0
The glitz, glamour, and unbridled decadence of the 80s are back in Yakuza 0 . Play as Kazuma Kiryu and discover how he finds himself in a world of trouble when a simple debt collection goes wrong and his mark winds up murdered. Then, step into the silver-toed shoes of Goro Majima and explore his “normal” life as the proprietor of a cabaret club. Fight your way through Tokyo and Osaka by switching between three different fighting styles instantaneously and beating up all manner of goons, thugs, hoodlums, and lowlifes. When you’re not fighting, kill time in 1980’s Japan. From discos and hostess clubs to classic SEGA arcades, there are tons of distractions to pursue in the richly detailed, neon-lit world.

Jackbox Party Pack 3
The threequel to the party game phenomenon features the deadly quiz show Trivia Murder Party , the say-anything sequel Quiplash 2 , the surprising survey game Guesspionage , the t-shirt slugfest Tee K.O. , and the sneaky trickster game Fakin’ It . Boot up the game on your console and share your room code – up to eight players can use their phones or tablets as controllers and play along! Plus tons of new features just for streamers. It’s a digital box full of fun!

In Case You Missed It 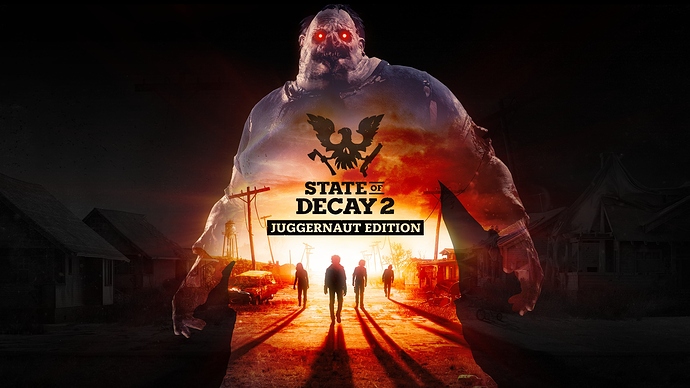 March 13 – State of Decay 2: Juggernaut Edition – Xbox One and Windows 10 PC
This remaster is packed full of new updates and experiences, spin off of original content and access to all 3 add-on packs released to date cross-platform multiplayer and more! It’s included with your membership to Xbox Game Pass and will be delivered as a free update to the existing game, which is already available in the Xbox Game Pass library.

The theme for February this year really seems to be “but wait, there’s more!” There are some free updates to games in library, and some DLC coming that you can buy for up to 10% with your membership discount.

Age of Wonders Planetfall: Tyrannosaurus Update
Check out exploration sites – rare imperial facilities which grant a lot of income and can be linked to your colonies to provide bonuses to produced units. Plus, new advanced settings like no colonizer mode, change the defender strength and more. New doctrines and changes for you to check out today!

Black Desert : Kunoichi Awakening
The Kunoichi class is dynamic and fast paced with light armor and many complex combos. Typically, with a sword as primary and shuriken as your secondary weapon. Learn more about this new update here on Xbox Wire.

DLC – Up to 10% off with Your Xbox Game Pass Membership

February 19 – Kingdom Hearts III: Re Mind DLC
Play the other tale that unfolded during the climax of Kingdom Hearts III ! Determined to rescue Kairi, Sora travels to the Keyblade Graveyard a short time before the final battle was to take place. Lacking a corporeal form, he traces the hearts of the seven guardians of light. Through experiencing their personal battles firsthand, Sora is about to discover truths that he has never imagined.

February 25 – Ark: Survival Evolved Genesis
Further the Ark storyline while adventuring through unique and diverse biomes via an all new mission-based game mechanic. Discover, utilize and master new creatures, new craftable items and new craftable structures unlike anything you have seen!

If you didn’t catch it earlier this month, we launched a whole new Xbox Game Pass Quests program. You can earn Microsoft reward points daily, weekly, monthly, and even special quests for Xbox Game Pass Ultimate members. You were going to play anyways — might as well get some points for it!

You’ve got some time to give these games another play before they go. Reminder that if you want to keep the fun going, you can use your membership discount buy them before they leave our library for up to 20% off! 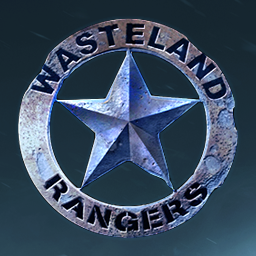 @Wasteland
Wasteland Remastered is now LIVE on Windows and Xbox One with Xbox Game Pass, Steam, and GOG! Head over to our welcome article for new-player tips and tricks: inxile-entertainment.com/post/welcome-t… https://t.co/D29r20kxIO