Dishonored 'The Knife of Dunwall' DLC Having avenged the Empress’s death in Dishonored’s main story, players will now get to slip on the coat of the chap who killed her. After a little tease yesterday, publisher Bethesda Softworks this morning announced ‘The Knife of Dunwall’, a DLC mini-campaign coming on April 17 for $10. Hey, this post contains spoilers, if you hadn’t guessed.

The Knife of Dunwall plops you into the boots of the dastardly Daud, armed with new weapons and powers as you head off on a merry adventure of your own. Daud can find hidden Bone Charms and Runes with the ‘Void Gaze’ power, and call in assassins to help out. New variations of old powers are promised too. He’s also armed with dazing Chokedust, Stun Mines, and a Wristbow firing sleep darts or explosive bolts.

It’ll bounce around “key events” in Dishonored’s timeline, including the assassination that kicked the game off. You’ll jaunt through the Legal District and Rothwild Slaughterhouse, and return to the Flooded District. The press release has an overview of its story:

After assassinating the Empress, and forever changing the fate of Dunwall, you embark on a search for redemption. The Outsider reveals the key to your atonement, but who–or what–is Delilah? Accompanied by the Whalers, your loyal band of mercenary assassins, your search will take you through never-before-seen districts of Dunwall as you face off against new and terrible foes … In the struggle to hang onto the last shred of your humanity, the choices you make will ultimately determine your fate. 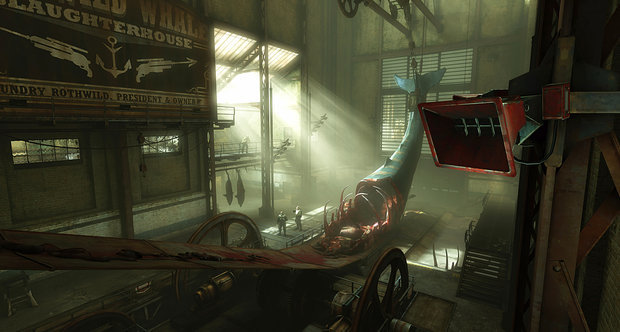