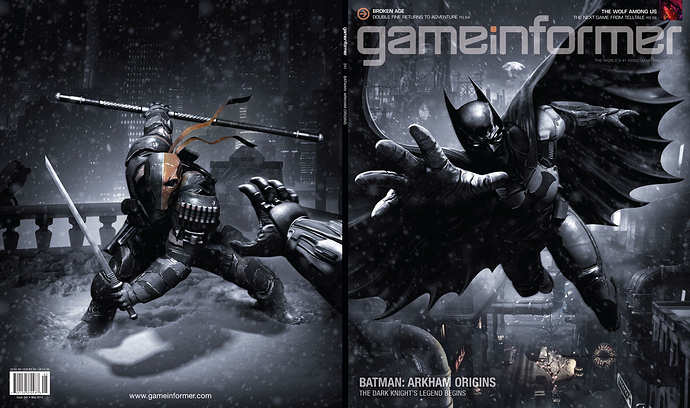 Warner Bros. Games Montreal has taken the mantle of the bat from Rocksteady Studios this time around for Batman: Arkham Origins. WB Montreal has full access to Rocksteady’s custom modified Unreal engine to capture the look and feel of the Arkhamverse. As the title suggests, the game takes place years before both of the previous Arkham titles when a young, unrefined Batman encounters many supervillains for the first time. On our full cover image below, fans will recognize the assassin Deathstroke, who appears for the very first time in a core Arkham game.

Heading up the vision for Arkham Origins is creative director Eric Holmes, known for being the lead designer of open world action hits The Incredible Hulk: Ultimate Destruction and Prototype. A self-professed lover of comics, Holmes even wrote the miniseries Transformers: Megatron Origin for IDW.

But that’s not all. We also have a feature on the first handheld Arkham game, Batman: Arkham Origins Blackgate. Releasing on 3DS and Vita the same day as the home console version, Blackgate is a completely separate experience that takes place after the events of Arkham Origins. Armature Studio is developing the 2.5-D Metroid-style exploration action game. Industry followers will recognize Armature Studio as the company founded by several of the leads from the Metroid Prime trilogy.

Mene ovaj deo brine-Heading up the vision for Arkham Origins is creative director Eric Holmes, known for being the lead designer of open world action hits The Incredible Hulk: Ultimate Destruction and Prototype.

“Warner Bros. Games Montreal has taken the mantle of the bat from Rocksteady Studios this time around…”

“Warner Bros. Games Montreal has taken the mantle of the bat from Rocksteady Studios this time around…”

When asked about the rumored sequels and whether or not he would return he responded, “Well…never say never.”

It’s not Year One, but it’s close.

As previously noted, the Dark Knight will face eight assassins, including fan favorite Deathstroke, who have journeyed to Arkham City to kill him. We now know that Black Mask is responsible for putting a bounty on Batman’s head, though exactly why will be a key mystery in the game’s story. Also playing into the plot - Gotham City’s acclimation to its rookie protector. Players will not only see a much more skeptical and potentially hostile Gotham City Police Department (aka the ‘GCPD’, which happens to feature a young Captain Jim Gordon), but younger and healthier versions of big bad guys like the Penguin - who apparently didn’t always have the tail end of a glass bottle shoved in one eye.
Arkham Origins will feature similar gameplay to its predecessors, as new developer WB Montreal is very much intent on picking up where Rocksteady left off. That means perch-to-perch movement, gliding kicks and ‘free-form combat’ are all back. While the Montreal studio was free to develop its plot and new feature (like a ‘Remote Claw’, which allows you to target and pull two objects together), it leaned on Rocksteady for advice on technical and mechanical elements of the game.
Another new feature - quick travel via the airborne Batwing. Though not a controllable vehicle, Arkham Origins will finally eliminate one of the more tedious elements from Asylum and City, allowing Batman to move from point to point much faster than before - - provided he dismantles towers that jam his ability to call in his plane. (Unlike, say, Far Cry 3, these tower sequences will require a wide variety of skills and powers, including some that will have to be unlocked first.) It’s a good thing Montreal is providing the Dark Knight with a quick method of transport - WB Montreal contends that Origins is nearly twice the size of Arkham City, adding an entirely new island, called ‘New Gotham’, to build upon the more familiar ‘Old Gotham’, which will still feature familiar locations like Amusement Mile and The Bowery.

The Montreal team intends to maintain the same world “density” despite doubling its size, adding ideas like ‘Crime in Progress’ (assist the GCPD and build your reputation) and ‘Most Wanted’ (track down non-assassin villains). In many cases these side quests will provide the upgrades to Batman’s arsenal. These upgrades, combined with the game’s existing XP system, funnel into the larger concept of the ‘Dark Knight’ system, which is basically the team’s way of progressively adding more complexity and difficulty to Origins.
Origins will also put more emphasis on Batman’s detective skills. Cases large and small will serve as a slower change of pace from action, allowing players to investigate crime scenes, gather evidence, analyze data and even return to those scenes with more information later in the game. Over time, as each case is solved, a full video narrative of the case will unlock, piecing together the crime.

Batman: Arkham Origins is set on Christmas Eve, years before Arkham City and Arkham Asylum, where mob boss Black Mask has it in for Batman. And he’s not the only one. Top super villains from the DC Comics universe are out to catch the world’s greatest detective. And even cops have joined the manhunt. Batman’s goal is to find out why Black Mask wants him dead, and to prove to the good cops that he’s on their side.

The Batwing will make a return, but Batman won’t control it directly. It will figure into story sequences and acts as a universe-appropriate form of fast travel.

New to the game is a remote claw similar to the Grappler in Just Cause 2. Batman can target two objects and fire out a claw. One claw will hook to the first object and another onto the second. Batman can then pull both objects together. Tactics for which this can be used include knocking enemies together, slamming heavy objects into foes, etc.

The predator-like sequences, where Batman swings from perch to perch, glide kicks, strings guys upside down, etc. will return.

Half of the game is made up of ‘Old Gotham’. Though there is an entirely new area of the game, across the bridge, called ‘New Gotham’, which is described as much classier and with much taller skyscrapers. The new zone is also said to double the size of the game world.

Players will be able to dismantle a hacked tower network, which consists of towers emitting a jamming signal preventing the Batwing from flying into the area, meaning fast travel is not an option. It also stops Batman’s sensors from placing points of interest on the map. Tower take-downs vary and require all of Batman’s skills. Some can be taken down quickly and easily, while others require upgrades.

The game will offer “Crime in Progress” moments where Batman can, for example, save cops from a group of thugs, etc. This, among other activities, will earn Batman experience points and respect from the Gotham City Police Department.

A “Most Wanted” system will allow players to go after villains outside of the main storyline. These missions can be tackled as you discover them .

Some missions will offer upgrades. If you had a tough time with a certain mission, Batman’s butler Alfred might offer you a new gadget.

A new “Dark Knight” system will provide the player a string of tasks that slowly increases in difficulty as they progress through the game. This won’t replace challenge mode, however.

Arkham Origins is in development at Warner Bros. Montreal. The series’ original developer, Rocksteady Studios, is working on another project, which is currently under wraps. According to the magazine, though, a Warner Bros. Montreal sequel would carve a unique territory for Rocksteady, if it ever decided to move forward in the Arkham series timeline.

Batman: Akrham Origins Blackgate is a 2.5D, Metroid-style Batman game for PS Vita and 3DS in development at Armature, the studio behind the Metal Gear Solid HD Collection on PS Vita, who were put in charge as they’re familiar with that gameplay style.

The game is set after the conclusion of Origins on consoles. At the Blackgate Penitentiary, located on an isolated island, a prison uprising has occurred. Batman ventures to the facility to put a stop to the riot.

Unlike the console Arkham games, Blackgate does not focus on leveling up abilities. Instead, it stays true to the formula of its sub-genre. All of his improvements will come through pick-ups and upgrades. The team wanted to give players a greater sense of collection.

The game is mostly set on a 2D plane, though it will take advantage of the three-dimensionality offered by the environments. Batman will explore, fight, and interact in both the foreground and background. For example, Batman can grapple up to a gargoyle on a background balcony from the foreground.

Combat is similar to the console Arkham games. It uses the Freeflow combat system, and button taps are used to attack, counter, and use gadgets. Gadgets include the Batarang, to stun enemies or hit distant objects, Line Launcher, to cross wide gaps, and a variation of the Explosive Gel, which allows you to shoot from a launcher onto spots around the screen, enabling ‘entertaining’ take-downs like chandelier dropping.

Batman will be able to see the sight lines of his enemies to know whether they can see him or not.

Blackgate is split into various sections, each accessible once you figure out a way outside the prison. There are no save rooms as you can manually save at your leisure. The game uses a modern checkpoint system, and you can defeat its bosses in any order. Similar to the console games, it will also have a detective mode—if an enemy is green, he hasn’t seen you, if he’s red, he’s onto you. This mode can also be used to uncover secretes, clues, and analyze situations. 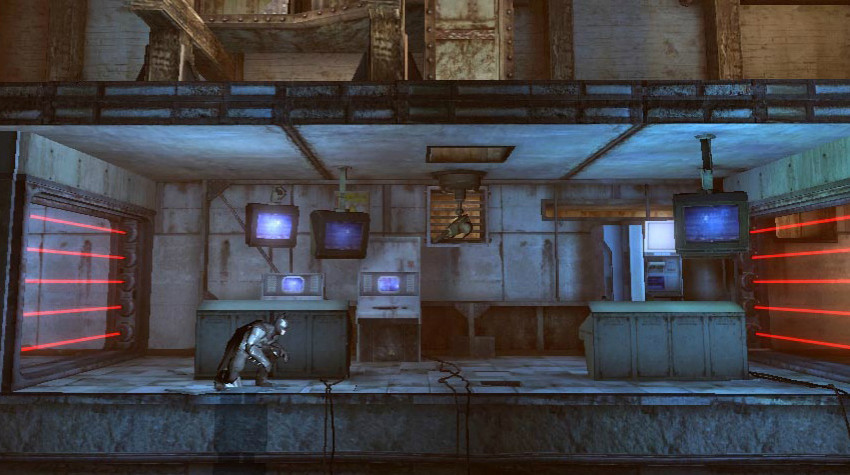 Former Arkham series director Sefton Hill told GameInformer, via CVG, that the developer believes in the new team.
“Rocksteady is excited to see WB Games Montreal developing the prequel to the Batman Arkham franchise,” he said.
“We are confident this talented team will craft a fantastic experience, bringing the origins of the Arkhamverse to life.”
One other little snippet harvested from the magazine’s reveal has creative director Eric Holmes talking up the decision to make a prequel to the existing games rather than a sequel.
“It gives us the opportunity to refresh things a bit. Refresh characters, refresh ideas, refresh the dynamic between Batman and other characters, and refresh the world, too,” Eric Holmes said.
“Batman hasn’t become the character that we know and are very familiar with.”
Batman: Arkham origins is due on PC, PlayStation 3, Wii U and Xbox 360 on october 25. A companion title, Batman: Arkham Origins Blackgate, is headed to 3DS and Vita.
We don’t officially know what Rocksteady is working on now that Warner Bros. Montreal has the Arkham city under its wing, but rumour has it we could be looking at a next-gen Silver Age title.