Valve Games Coming To Xbox One, May Use Dedicated Servers

Yesterday a group of game enthusiasts uncovered that Dota 2 Workshop Tools is actually a _soft _launch for Source Engine 2. A Reddit user did a great job of delving deeper into the Workshop Tools’ and found out some interesting points that indicate presence of Source 2 files. But that is not all.

On further investigation, it was revealed that the engine might be coming to Xbox One. As revealed by a NeoGaf user, the files had references to Xbox dashboard and dedicated servers. The code below the post states the following: “(Only used when hosting xbox games). Send clients updates at the same time. This saves CPU because the server will encode and calc deltas on less frames,” and “Dedicated Server for Xbox. Not using STEAM.”
_
On further investigation of the comments, we see statements for APIs that are being used to test connectivity between Xbox One and Steam. Debug messages such as this, “Failed to connect to xboxsystem,”_ are a clear giveaway.

It is important to note that all of this information should be taken with a massive grain of salt but what we can _assume _is that there might be an application under works that might allow users to stream Steam games to Xbox One or it might simply mean Dota 2 is coming to the console.
What are your thoughts on this? Let us know in the comments section below. 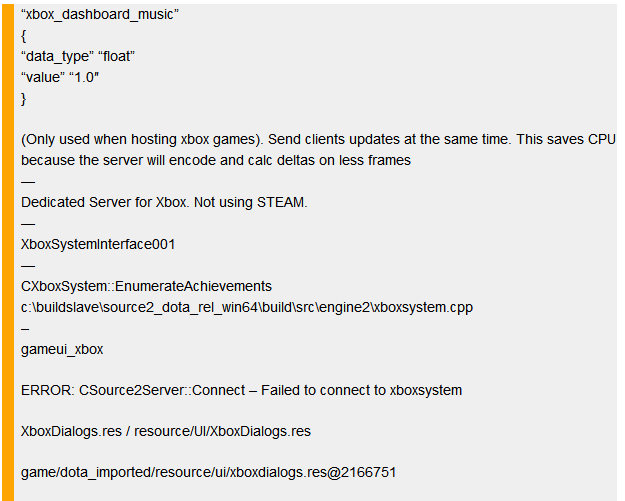