Star Wars: Battlefront will take place during the original film trilogy’s timeline, according to a report from the Associated Press.

It appears the information was posted ahead of time, (via Kotaku) as the report is written in past tense.

According to the report, players will take part in “frenzied shoot-outs between up to 40 players” with the option to choose either the Rebel Alliance or Galactic Empire.

A team of “jetpack-equipped rebels” were shown in a game demonstration flying across Endor as Stormtroopers on speeders and in walkers met them head on.

Hoth, Tatooine and Sullust which was mentioned in Return of the Jedi are locations players will visit. Players will be able to take on the role of Boba Fett and Darth Vader on the battlefield as well.

“You can storm in as the Dark Lord himself,” said design director Niklas Fegraeus. “You can wield a lightsaber. You can Force choke the rebel scum, which is fun. Basically, you are the boss of the battle. This means that you, as Vader, can lead your team to victory — if you play well.”

There will also be free DLC released two weeks prior to the December 18 theatrical premiere of Star Wars: The Force Awakens. The DLC will be titled Battle of Jakku and those who pre-order the game will recieve the DLC on December 1 before it releases to the public on December 8.

The content is set on the planet of Jakku from the film, starting off where Return of the Jedi ended as the New Republic discovers an Imperial presence in the Outer Rim enclave.

There will also be dogfights with TIE Fighters, X-wings and the Millennium Falcon through dedicated space battles will not be included. Instead, the team is focusing on vehicle and ground based battles.

DICE’s Executive producer Patrick Bach said the team wanted the game to be an authentic Star Wars experience both from the ground and while operating the wide variety of vehicles and machines such as AT-STs and AT-ATs.

Bach also told Eurogamer that Battlefront will not feature a single-player campaign, instead it will contain “crafted missions” playable solo or with a friend via split-screen offline or through online co-op. Along with the two-player splitscreen mode is a Partner feature which means both players can “share experience and unlocks” as well as spawn at each other’s location.

The game will also include modes with different player caps which will be smaller than the aforementioned 40 player battles.

Players will also be able to switch between first-person and third-person perspectives “at will” and characters can be customized vi armor, weapons and abilities but only to a point. iconic characters Darth Vader and Boba Fett are two examples of clothing and armor options being unavailable.

Yesterday, new artwork and the first teaser screen appeared for the upcoming shooter. A video clip was also shown at the end of the Star Wars: The Force Awakens trailer which was shown to the public during the day one ofthe Star Wars celebration.

It was also revealed through code included on the game’s official website that Star Wars: Battlefront would release on PC, PlayStation 4 and Xbox One November 17 in North America and November 20 in the UK.

EA will show the first trailer for the game later today through a livestream on the Star Wars website. As soon as the trailer drops, we will post it for you as quickly as possible.

-Has two player splitscreen
-It sounds like there isn’t a traditional campaign and something more akin to spec-ops from CoD
-Modes vary from 8 players to 40 players
-You can toggle between first and third person
-There’s flyable vehicles but no space battles
-The 7 minute demo was on PS4, but there’s no mention of the forthcoming trailer platform

“Battlefront” will focus on frenzied shoot-outs between up to 40 players portraying Rebel Alliance and Galactic Empire forces. In a demonstration of the game’s multiplayer mode, a team of jetpack-equipped rebels were shown carving their way through the woodsy Endor while Stormtroopers charged at them on foot, on speeders and within walkers, including a hulking AT-AT war machine.

Other locales teased in game footage included the snowy Hoth, sandy Tatooine and gooey Sullust, a lava-spewing planet referenced in 1983’s “Return of the Jedi,” as well as many “Star Wars” games and novels, but rarely ever seen. “Battlefront” won’t solely be centered on expendable ground troops. The game will reward sharpshooters with the ability to embody such iconic characters as bounty hunter Boba Fett and Sith baddie Darth Vader on the battlefield.

“You can storm in as the Dark Lord himself,” said “Battlefront” design director Niklas Fegraeus. “You can wield a lightsaber. You can Force choke the rebel scum, which is fun. Basically, you are the boss of the battle. This means that you, as Vader, can lead your team to victory — if you play well.”

The action will also take to the skies with players engaging in dogfights with TIE Fighters, X-wings and the Millennium Falcon, though the developers were coy about how battles would alternate between ground and air combat.

“We wanted it to feel authentic to this universe,” said “Battlefront” executive producer Patrick Bach. “You can get into these vehicles, from speeder bikes to X-wings, TIE fighters, AT-STs, AT-ATs. There’s a wide range of vehicles that we wanted to realize. The difficulty with a game is that they need to be balanced with the troops on the ground.”

“Battlefront” will also include a free downloadable level available two weeks before “Star Wars: The Force Awakens” opens in theaters Dec. 18. It’s set on Jakku, the battle-scarred desert planet glimpsed in “Force Awakens” teasers. The expansion, dubbed “Battle of Jakku,” will explore the moment following “Return of the Jedi” when the New Republic confronted Imperial holdouts on the previously unseen Outer Rim enclave. 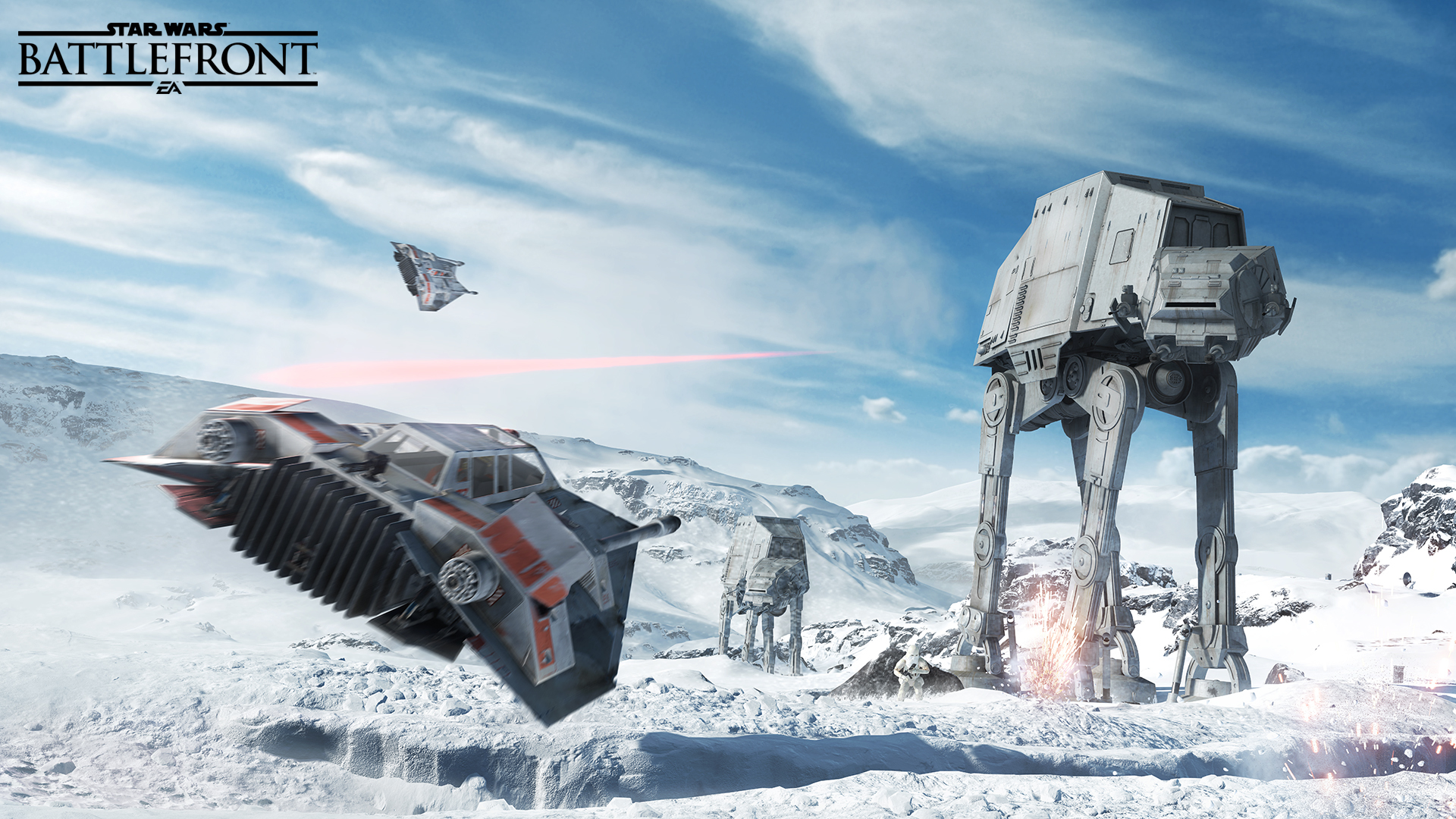 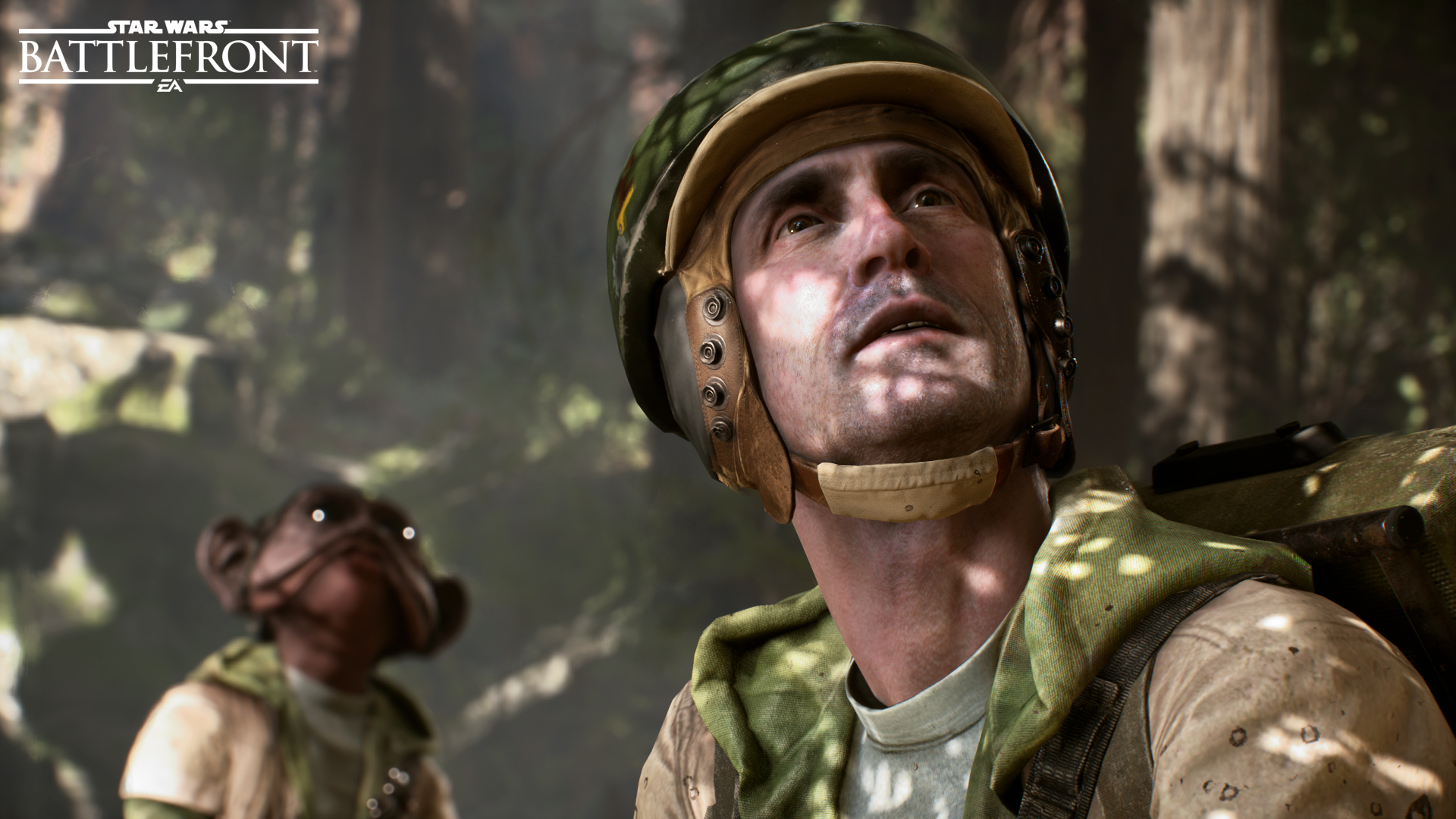 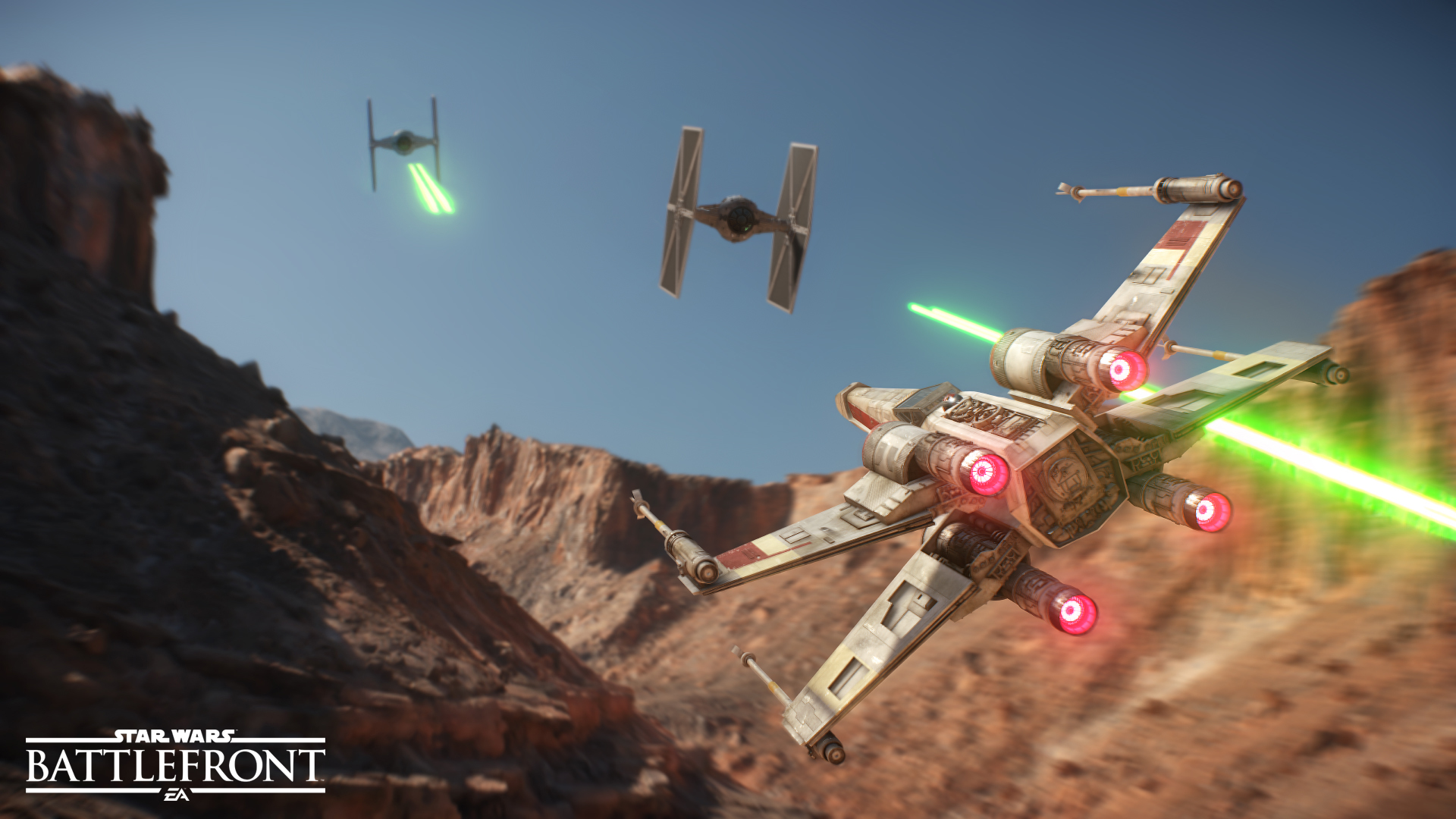 DICE’s upcoming first-person shooter Star Wars: Battlefront will not have a traditional campaign mode similar to the ones found in the developer’s previous Battlefield games. Instead, Battlefront will include smaller, shorter missions that can be played solo or in split-screen co-op with a friend offline or online.

“The game is first and foremost a multiplayer game,” producer Patrick Bach told IGN. “[The original Battlefront] was a multiplayer game. That’s the game we wanted to create–to recreate the battles of the Original Trilogy.”

In our own new preview of Battlefront, editor Chris Watters explains that DICE was not forthcoming with details about how these co-op missions would work. Developers said only that these missions will take place within the settings of the multiplayer maps. That would mean places like Hoth and Endor, among others.

Additional details about Battlefront’s co-op mode will be announced at E3 in June.