A Gears of War: Marcus Fenix Collection isn’t on the cards, according to Black Tusk’s studio manager.

Rod Ferguson, who’s working at the developer in charge of the next entry in the popular franchise, dashed the hopes of many gamers with his tweet, only to cause them to soar again moments later.

“I love the passion, but there’s no Marcus Fenix Collection,” he wrote. “We ARE working on other exciting Gears projects. I’ll see you at E3!”

Notice how Ferguson said “projects”, plural. As far as we know, the new Gears of War title is the only game in the works at Black Tusk, since the project it was working on prior to Microsoft handing them the reigns to the franchise was put on hiatus. Today’s tweet could suggest otherwise, however.

Of course, it’s worth noting Ferguson could simply be suggesting Black Tusk isn’t working on such a collection, or a wider anthology is being planned. Whatever the case, it looks like E3 is the place to be to find out more!

Microsoft bought the rights to the Gears of War franchise from Epic Games early last year, and handed development duties to the Vancouver-based Black Tusk Studios. The developer was already working on another franchise for Xbox One at the time; sadly, it seems that this may now have been put on ice.

Ex-Epic Games director Cliff Bleszinski also has shared his thoughts on Microsoft’s acquisition of Gears of War. “I don’t think the franchise could be in better hands,” he stated on his blog. “Gears is just as much Rod’s baby as it was mine. He’ll take good care of her.” Bleszinski will not be involved in the future of the series.

Sent from my GT-I9100 using Tapatalk

Sent from my SM-G313HN using Tapatalk 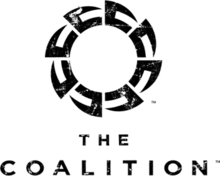 The Coalition (formerly Zipline Studios, Microsoft Game Studios Vancouver and Black Tusk Studios) is a Canadian video game developer and a studio of Xbox Game Studios based in Vancouver. The Coalition is best known for developing games in the Gears of War series after the franchise's acquisition by Xbox Game Studios from Epic Games. The studio was formed in February 2010 as Zipline Studios, and under that name developed the Facebook game Relic Rescue. In May 2011, the studio was renamed Micros...