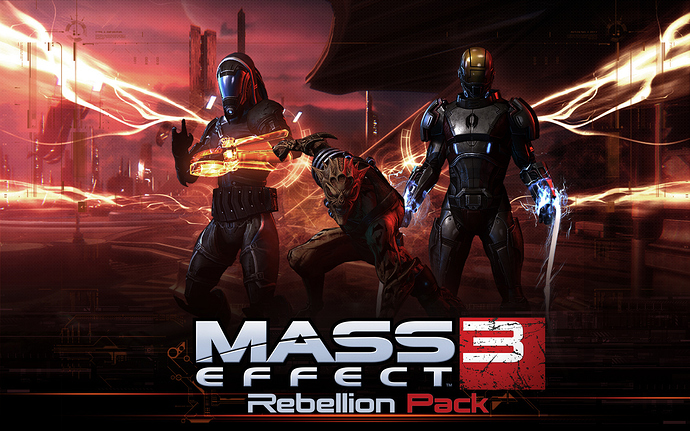 NEW CHARACTERS
Vorcha Soldier
Thanks to their unique physiology and their Bloodlust ability, the Vorcha are joining the fight and are perfectly suited for the utilitarian soldier kit.

Vorcha Sentinel
The innate aggressiveness found within the Vorcha make them shockingly durable combatants, and when coupled with their Flamer skill, the Vorcha sentinel is a force to be reckoned with.

Male Quarian Engineer
Quarians have spent centuries at perpetual salvage and ship repair; the survival of their species depends on this technical expertise. When bringing the new Arc Grenade to the fray, the Quarians prove their prowess as effective engineers on the battlefield.

Ex-Cerberus Vanguard
When the Illusive Man turned to indoctrination in order to ensure the loyalty of his troops, many Cerberus operatives defected and joined the Alliance in order to stop the Reapers. Now that we’re on the same team, Ex-Cerberus Vanguards (along with their new Lash attack) are quickly proving their worth.

Ex-Cerberus Adept
A result of the Illusive Man’s early experiments in enhanced human physiology, Ex-Cerberus subjects are highly skilled combat and biotics specialists. As a result, Ex-Cerberus Adepts can lay waste to the enemy with their Smash and Singularity powers.

NEW MAPS
Firebase Jade – Surrounded by huge waterfalls, Firebase Jade overlooks an ancient reservoir built by the salarians centuries ago. Set up strategic chokepoints inside the base’s main buildings to get the jump on your enemy, and work with your team to meticulously clear each room to achieve victory.
Firebase Goddess – Nestled in the epicenter of a Thessian metropolis, Firebase Goddess is one of the last strongholds of asari resistance against the Reapers. With its circular layout, Firebase Goddess is a tough location to control. This arena combines heavy cover and elevated firing positions, so stay light on your feet.

NEW WEAPONS
Cerberus Harrier Assault Rifle – These Cerberus-modified Mattock rifles are fully automatic. Cerberus gunsmiths reined in the recoil issues, resulting in a gun that stay on target, but delivers slightly less punch per round than a standard Mattock. As such, the weapon is typically utilized by Cerberus’ elite troopers, who train constantly to make every burst count.
Reegar Carbine Shotgun – This electrical weapon improves upon the arc pistol’s design by generating a sustained current on its target. This weapon is named for the Quarian Reegar family, whose marines have served valiantly against the Geth.
Krysae Sniper Rifle – This Turian antimaterial rifle is modified to kill Reaper enemies. The Krysae’s scope uses a rangefinder that adjusts to keep the target in proper proportion to the shooter, which comes in useful when the sniper is forced into close range. Its specialized ammunition is both armor-piercing and explosive. In a desperate move, the Turians released its specifications over the extranet so that nearly anyone with a fabricator could manufacture this weapon to help the war effort.

NEW IN-MISSION OBJECTIVE
Randomly occurring during waves 3, 6 and 10, this new objective will demand that teams retrieve a high priority package and securely escort it to a designated extraction zone on each map.

NEW GEAR SLOT
A new slot will be available on the equipment screen, offering players a persistent gameplay bonus that will not expire after the end of a match. These new items will vary from weapon upgrades to character enhancements and will be available through reinforcement packs.

How do I get new characters and weapons from the Rebellion Pack?
The new items in the Rebellion Pack will be available as rewards inside existing Reinforcement Packs. Make sure to look out for promotional packs and weekend challenges for other ways to unlock the content.